Audi Sport removes R8’s front drive shafts for RWS model, but is it a sweeter, more rewarding driver’s car as a result? 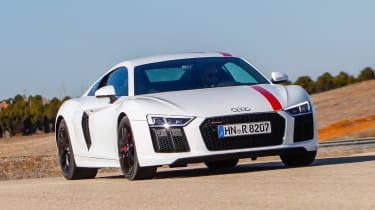 We can’t help feeling Audi could have nudged the performance envelope further to help differentiate the R8 RWS from its quattro sibling. It feels very much like the standard car (no bad thing) in normal driving, and only when you’re fully committed does it reveal its true traits. It’d be nicer to engage the R8 RWS at slightly lower speeds, which together with more adjustability would have made it the purer driver’s car that Audi was after. But that engine and sweet damping mean it’s still a great performance car, and no doubt the 999 owners will be thrilled.

The R8 RWS marks a significant step for Audi, for this mid-engined model is the firm’s first rear-wheel drive series production car. RWS stands for Rear Wheel Series, denoting the two-wheel-drive setup, a development path inspired by the brand’s successful R8 GT3 racer and one Audi Sport says it’s followed in a quest for a purer, more rewarding driving experience.

A quick glance at the vital statistics says it should be a positive step. The RWS uses the standard R8 as its base, so the 533bhp naturally aspirated 5.2-litre V10 remains, sending drive through a seven-speed dual-clutch automatic transmission.

Losing the centre differential and front driveshafts from the four-wheel-drive car, among other components, means the RWS is also 50kg lighter. There’s also been a commensurate adjustment in the car’s chassis setup, with an RWS-specific sport suspension tune that incorporates a 10 per cent stiffer front anti-roll bar and a new steering calibration. There are some very minor tweaks to the dampers (not stiffer, we’re assured), while the spring rates remain the same. 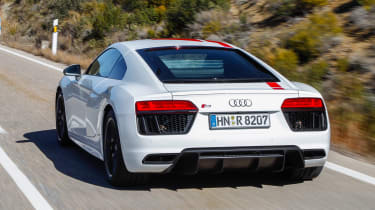 Unless you’re pushing quite hard it’s difficult to sense these subtle alterations, as the RWS feels very much like the standard car. The damping is still just as good on a flowing road, controlling the body well but providing a supple platform; the steering is fast and accurate but doesn’t offer the feel you get from a 911, while the aluminium spaceframe construction gives the car plenty of rigidity.

Like the R8 quattro, it’ll push into understeer (maybe earlier than you might think), but unlike the all-wheel drive car it’s more difficult to neutralise with the throttle – as the front wheels can’t pull you out.

This means you have to commit to bringing the car’s rear axle into play, at which point the RWS’s window of playfulness opens wide and its level of delicious adjustability becomes apparent. It sounds obvious, but it feels very much like an R8 without a pair driven front wheels. 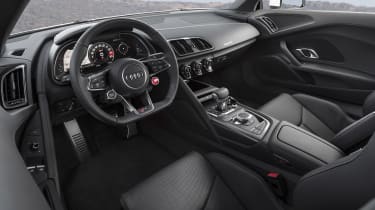 There’s a nice balance to be found; the removal of the quattro setup means the RWS’s weight distribution is now more rear-biased at 41:59 front to rear – compared with 44:56 on the standard car. You can just about sense this in normal driving, while pushing harder on a track reveals the Audi’s more amusing side. Purity though? We’re not so sure.

The engine is a constant, however. Despite the lack of four-wheel drive (traction is still surprisingly good), with launch control, the RWS still sprints from 0-62mph in 3.7 seconds – and the Coupe will hit 198mph flat-out.

It’s the way it delivers this kick that makes it. The R8 is one of the few performance cars left with a big, naturally aspirated engine, and it’s this, along with its driven rear axle, that defines the RWS. The engine wails to its 8,700rpm rev limiter, spewing out a rich and rounded but aggressive note that turbocharged rivals simply can't match.

The gearbox is equally as impressive, slotting home ratios at full throttle with not so much as a hint of shunt, while downshifts are just as smooth and announced by a flare of revs and a volley of pops and bangs. The R8 RWS’s powertrain, at least, isn’t short of personality. 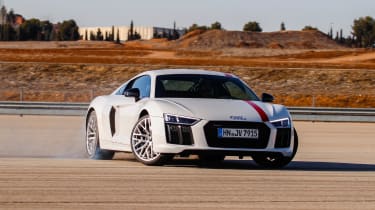 Just 999 examples of the rear-drive R8 will be built. With the Coupe priced from £112,450, it’s the most affordable R8 yet. For that, you get a plaque inside to highlight its limited-run status, an optional decal that runs the length of the body, and some other black styling details outside.

There’s a good level of kit, too. Audi’s advanced 12.3-inch Virtual Cockpit takes care of infotainment and is easy to use once you’ve got your head around the system. LED headlights, leather and Alcantara sports seats, and all connectivity tech you’d expect are all standard, too.

If it matters to you, Audi claims the RWS will return 22.8mpg and emit 283g/km CO2, but what might be of more interest is the car’s usability. Despite the lack of front differential, there’s no more luggage space, so you’re still limited to a miserly 112 litres in the nose. It’s enough for a couple of squashy bags, though, while there’s an extra 226 litres behind the seats, which makes it even more useful.