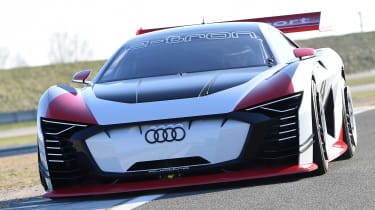 The Audi Vision GT is the kind of car that will convince even the most skeptical petrolheads about electric cars. Its performance is parallel with the most hardcore supercars and is a perfect demonstration of the potential EVs have. Sadly this one won’t be going on sale any time soon, but by 2020 Audi will have an electric coupe in its lineup.

Audi is tearing down the barriers between virtual and reality. The German manufacturer has brought its racer from the Gran Turismo video game to life, which will be used as an office race taxi in Formula E. And ahead of its official maiden drive in Rome later this month, Auto Express has been behind the wheel.

The ultra-wide and low-riding two-seater is inspired by the legendary Audi 90 quattro IMSA GTO of the early nineties, but unlike its spiritual successor it does not run on petrol: the Vision GT is fully electric and powered by a 60kWh lithium-ion battery. 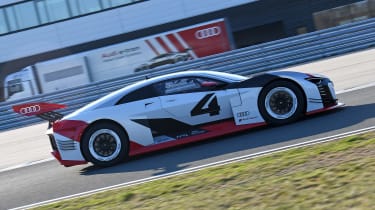 Built in less then 12 month, the team behind the project cherry-picked parts from Audi’s vast parts bin: the drivetrain comprises three 268bhp electric motors, while the battery is from the upcoming e-tron SUV. The ultra-direct steering and the super-stiff suspension are from Audi’s DTM race team – only the chassis and the body are unique to the Vision GT. Combined, the 805bhp, four-wheel drive EV weighs 1,450kg.

Picking parts from various outlets not only fast-tracked the project but also guaranteed maximum driving performance - and that was the main effort of the Vision GT, according the project boss.

Once you slide through the narrow door, down into the tight bucket seats and get to work on the five-point harness it feels like a genuine racecar. And the performance is equally impressive; the sprint from 0-60mph in less than 2.5 seconds feels comically fast. The Vision GT is limited to 139mph, getting there with minimal effort, but the braking performance from the enormous carbon ceramic brakes wipes off speed with just as much ferocity.

Approach a corner and the grip is amazing with the direct steering making it feel light and agile in a way that other electric vehicles aren’t. Of course, this type of performance in an electric car on a track isn’t going to last forever; after four laps our fun is over but such is the physicality of the experience and performance I’m not sure we could have taken much more.

By building a fully functional racecar, Audi has gone one step further than any other manufacturer to be involved Gran Turismo franchise. The car itself will remain a one off and a demonstration of what the German brand can create when it comes to electric vehicles. And with a four-door EV coupe planned for showrooms in 2020 it could be a taste of what’s to come.