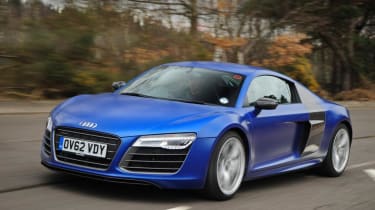 Audi’s first attempt at a supercar shook up the establishment and it continues to do so. With the earliest examples now a dozen years old, some reliability and build quality glitches are starting to appear. These can be expensive to fix, but this model is relatively cheap to buy and run compared with many rivals, and it’s proving to be made to a very high standard. Running an Aston, Porsche, Ferrari or Lamborghini is likely to tax your wallet at least as much, yet the Audi looks no less sensational than those alternatives, plus it’s just as fast and in some cases it’s more usable. However, if doing your homework matters plenty when buying an A3, at this level, it’s a whole lot more important.

Audi is no stranger to performance cars, but until the original R8 arrived in 2007 it had never tried to enter the supercar market. A raft of hot coupés, saloons and estates kicked off with the all-conquering Quattro in 1980, while the TT that first went on sale in 1998 was a landmark sports car.

Thanks to its Quattro division (later renamed Audi Sport), Audi catered well for anyone who wanted serious pace, but the company had never really managed to get the hang of brilliant all-round dynamics. The R8 changed that with its mid-engined configuration and lightweight construction, plus its searingly fast V8 and V10 engines.

It’s now been more than a decade since the original R8 launched, and the car makes for a relatively affordable buy – but what about the rest of the ownership package? 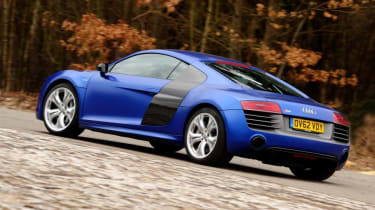 The lighter, more powerful and more focused R8 GT V10 coupé was unveiled in summer 2010; a year later an R8 GT Spyder appeared. Only 35 of each came to the UK. A V8 Spyder launched in summer 2010, just before the V8 was upgraded to 424bhp. A revised R8 hit showrooms in July 2012 with standard LED headlights and heated seats, a slicker auto option and a top-spec V10 Plus edition (with 542bhp).

It’s easy to assume that the ultimate version of the R8 is the one with the biggest engine, but while the V10 is searingly fast and sounds fantastic, in the real world it’s not much quicker than the V8, despite costing more to buy and run. And because the smaller engine is lighter, the V8 R8 feels better balanced; go for the V10 if you wish, but not because you feel you ought to. 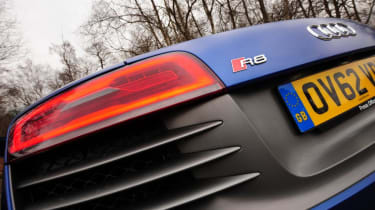 In terms of options, magnetic dampers produce superb body control without compromising the ride, but can fail very expensively. Similarly, while ceramic brakes provide incredible stopping power, they’re much more costly to service than the steel alternative. Make sure you really need them.

Alternatives to the Audi R8

Is your focus superb balance above all else? You’ll want a mid-engined alternative, which means either the Ferrari F430 or its quicker and more costly 458 Italia successor. They’re superb to drive but mileage sensitive; values will plummet if you use either very much.

The same could be said of Lamborghini’s Gallardo, which is related to the R8 so has a similar 5.2-litre V10, usually four-wheel drive and comes in open or closed forms, just like the Ferraris. Prefer something more usable? You could buy the front-engined Aston Martin Vantage V8 or V12, but perhaps the greatest threat to the Audi is the Porsche 911. With its superb handling, build quality, performance and image, it presents potential R8 owners with a tricky, although enviable, dilemma.

Check for corrosion in the radiators and oil cooler pipes. Both will lead to leaks that you don’t want to have to plug yourself.

Engine warning lights can result from poor-quality fuel or damaged wiring. The former is a sign of careless ownership; the latter big bills.

The body, chassis and suspension are aluminium, which means crash repairs are specialised, and minor parking dings can be expensive to repair.

The R8 might look the part on the outside, but climb inside and there isn’t the sense of occasion that you might expect, with many parts shared with much cheaper Audis. Indeed it’s only the low-slung seating position that gives the game away. Speaking of which, the R8 is just as superb ergonomically as you’d expect of an Audi. However, while cabin space is good, carrying capacity isn’t, because there’s just a small boot in the nose. 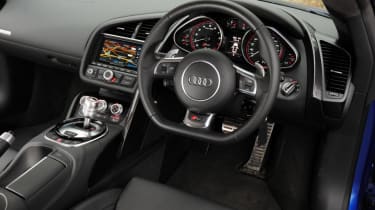 Fixed servicing is set at 12 months or 9,000 miles, and variable allows up to two years or 19,000. R8 owners can choose either, but the GT is available only with fixed. Check-ups alternate between minor and major.

Both V8 and V10 cars cost £485 for a minor service and £895 for a major one. Chain-driven engines mean no cambelts are required, while every two years the brake fluid has to be replaced (£99). S tronic cars need fresh transmission fluid every 38,000 miles, at £325.

There’s been just one R8 recall, issued in August 2011 and applying to convertibles built between April 2009 and June 2011. These could suffer from fuel leaks due to a pipe being too close to a heat shield and possibly chafing. The pipe had to be inspected and replaced if necessary, then isolated from the heat shield.

It’ll be no shock to hear that the R8 has never appeared in our Driver Power surveys, because it sells in relatively low numbers. However, the Mk1 coupé and Spyder have generated 11 owner reviews on carbuyer.co.uk. The consensus is that, while running costs are high, they’re not bad for such a capable car. Unsurprisingly, performance gets the thumbs up, but so does reliability.