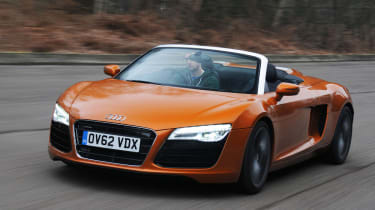 The Audi R8 has cemented its place as one of the sweetest handling and usable supercars money can buy. The Spyder adds another string to its bow with a folding fabric roof which ups the excitement levels, which allows occupants to hear the mid-mounted engine in all its glory. The R8 Spyder comes with either a 4.2-litre V8 or 5.2-litre V10, although unlike the coupe, there's no high-performance V10 Plus version offered. Buyers can choose between the standard manual or new seven-speed S tronic auto. The latter suits the Spyder's slightly softer image, but still allows drivers to take control of gearshifts when they want to enjoy the car's performance in full.

The R8 Spyder is nothing short of sensational to drive. Remove the hood and whether you’re in the V8 or V10 model, you’re treated to a symphony from the exhausts – higher-pitched in the V10 and more bassy in the V8. A retractable rear windscreen allows you to get the full effect when the roof is in place, too. The suspension is slightly softer than on the coupe, but it corners almost as precisely and just as flat. The four-wheel-drive system offers loads of grip and ferocious acceleration, but when provoked the rear-biased system delivers lively handling similar to that of a rear-wheel-drive car. We love the excellent six-speed open-gate manual gearbox but the facelifted model – introduced at the start of 2013 – also boasts an excellent dual-clutch S-Tronic automatic 'box to replace the jerky, slow-witted R-Tronic automated manual.

Due to the extra strengthening needed in the chassis, the Spyder weighs 100kg more than the equivalent coupe – although the V8 version weighs 60kg less than the V10 – which damages the fuel economy. The V8 returns fuel consumption and CO2 emissions of 19.6mpg and 337g/km respectively (with the manual transmission) while the V10 can only manage 19mpg and 356g/km. Things get better if you go for the S Tronic, which improves fuel economy to 22.4mpg in the V8 and 21.2mpg in the V10. Servicing won’t be as pricey as for more exotic supercar manufacturers, such as Maserati, Ferrari and Lamborghini, but will be expensive nonetheless.

With the roof folded away underneath the rear deck, the R8 Spyder looks even wider and more dramatic than the coupe. The engine is no longer visible through the rear deck, as a series of dramatic silver vents have been added along the buttresses. The carbon side-blades have been removed, too, which gives the Spyder a cleaner profile. It used to be that the only way to distinguish the V10 model from the V8 was the two oval instead of twin tailpes – but now both have large round exhausts mounted either side of the rear bumper. You'll have to look out for the tiny V10 badge on the wings now instead.

Refinement with the roof up is excellent and even with it stowed away, wind buffeting is minimal – as long as the windows are up and the wind deflector is in place. The cabin itself is spacious for two passengers but luggage space is seriously limited with only 100-litres available in a compartment in the nose. If you can cram a bag in there, though, the R8 Spyder is a capable and surprisingly comfortable long-distance cruiser. The four-wheel-drive system helps the V10 to claw its way from 0-62mph in 4.1 seconds (3.8 seconds in the auto), but also offers better stability in adverse weather conditions.

Audi’s reputation for reliability and quality is second to none, and the R8 Spyder does nothing to change that. There was one recall back in 2011 for a potentially faulty fuel supply line, but the problem only affected cars built over a 12 month period and has since been rectified. Every R8 comes with plenty of airbags and electronic aids, including stability and traction control.