The revised 2019 Audi R8 does what the Audi R8 has always done best, delivering supercar drama in a usable everyday package 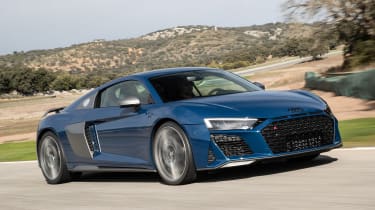 The Audi R8 has been reworked with extra power and more feel from the steering – all wrapped up in a more aggressive-looking body. These changes add just a little tinsel and spice to a car that was already brimming with personality. While rivals from McLaren and Porsche may offer something more dynamic, the R8 still rules the roost for its sheer drama and old-school charm.

The Audi R8 has always stood out from its peers because it’s so beautifully old- fashioned. While other cars are powered by efficient, downsized turbo engines, the R8 clings on to its wailing V10 – using big- chested cubic capacity for its arsenal.

For the R8’s mid-life update, a touch more power has been squeezed out of the 5.2-litre engine, alongside a few engineering tweaks and a light visual makeover.

Audi’s ‘Singleframe’ grille has been widened and lowered to make room for three slots that hark back to the Ur-quattro of the eighties. At the back you’ll notice a new full-width mesh cover, as well as a fresh design for the bumper, while the exhausts are inspired by the GT3 racer. 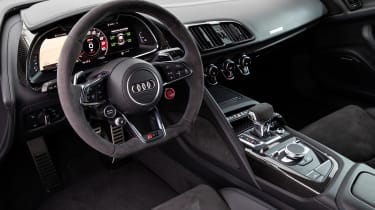 Under the revamped body, the standard V10’s naturally-aspirated Lamborghini-derived engine gets a 30bhp power hike to 564bhp. The old V10 Plus is now badged ‘Performance’ – with its 602bhp output swelled to 613bhp. That gets the mid-engined monster from 0-62mph in 3.1 seconds, before topping out at 205mph.

There are no spring or damper changes. What is new, however, is the option to switch out the steel anti-roll bar for a new aluminium carbon fibre-reinforced one, which shaves 2kg off the car’s weight.

There’s a faster steering rack as well; the standard electro-mechanical set-up is noticeably sharper and has slightly more feel, but the dynamic set-up is too quick – especially in its Performance mode. There are larger ceramic brakes, and you can now opt for Michelin Pilot Cup 2 tyres.

The changes are small then, but there was never really anything wrong with the way the old R8 drove. While we can’t tell you whether the changes make much difference on the road, the tricky Ascari circuit in Spain showed the updates have added a little more bite. The power gains feel negligible, but the howling V10 is still the R8’s party piece.