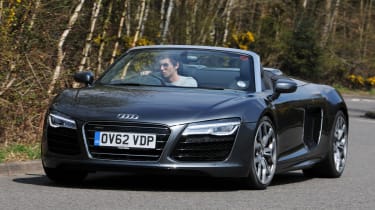 Audi made the right choice in not changing the R8’s styling too much; the Spyder is still one of the most eye-catching supercars around. The new dual-clutch box has made a world of difference, too, but it still doesn’t feel as smooth in town as a 911. The cabin isn’t quite up to scratch, either. A few too many compromises from a near-£130,000 car.

Unless you want the extreme Audi R8 V10 Plus Coupe, the facelifted V10 Spyder is the most expensive R8 you can buy. We’ve driven it in the UK, but is it worth its £125,360 price tag?

That figure includes a new seven-speed S tronic auto, which replaces the old R tronic, and it’s a huge improvement. It helps the R8 live up to its image as an everyday supercar better than ever, although in town we think Porsche’s PDK auto is still smoother. Some low-speed downshifts are a bit jerky and it can hesitate when pulling away.

There are no changes to the 5.2-litre Lamborghini-sourced V10, but there didn’t need to be. With 518bhp it can launch the Spyder from 0-62mph in 3.8 seconds. Yet at any speed it feels like it has plenty of performance in reserve.

Also, you’ll always want to have the box in Sport mode and – where possible – the roof down, just so you can hear the car’s incredible howl at full throttle and the flaring revs on every downshift.

The suspension is as well judged as ever. It certainly feels firm, but it doesn’t crash noisily into potholes or transmit every minor bump into the cabin.

That’s not at the expense of handling, though, as the R8 takes every corner in its stride. There’s lots of grip and balance around fast sweepers, but lightness and agility through a set of tight bends. It’s all helped by the weighty steering, which is quick to respond and natural.

Best of all, these abilities are wrapped up in a package that’s only got more beautiful with this facelift. We just wish Audi had improved the cockpit: the centre console and some switches are starting to look a little dated – especially compared with the Porsche 911’s fantastic cabin.