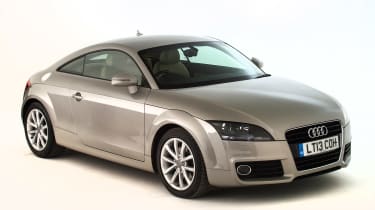 Audi isn’t renowned for taking risks, so when it revealed the TT concept at the 1995 Frankfurt Motor Show, many people doubted the conservative car maker would offer it for sale. However, not only did Audi introduce the TT coupe in 1998, but the car barely differed from the concept.

That first edition was replaced by an all-new model in 2006, and just like the original, there were coupe or Roadster bodystyles. Both proved to be easy to own thanks to their build quality and strong engines, and while rival sports cars are better to drive, the TT is one of the most usable of the breed. And since the arrival in 2015 of the latest version, the Mk2 looks more tempting than ever used.

The Audi TT first arrived in 1998 and was on sale for eight years before being replaced by the Mk2 in 2006. The latest Mk3 hit showrooms in 2014, but it’s the second generation model that we’re focusing on this review. 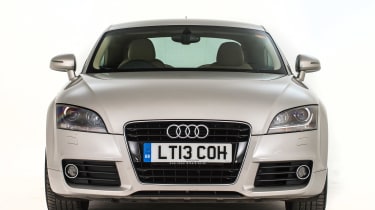 The TT Mk2 coupe reached UK showrooms in April 2006, with 2.0 TFSI or 3.2 V6 petrol engines. Eight months later a Roadster appeared, with the same engine options. In January 2008 a TTS coupe and Roadster arrived, both powered by a 268bhp 2.0 TFSI engine; within a month there was also a 168bhp 2.0 TDI with both bodystyles.

From April 2009 there was a new entry-level front-wheel-drive 1.8 TFSI Roadster. An equivalent coupe arrived in October 2011, and in the meantime (in 2010) the TT range was revised, with a fresh interior design and more options, plus reduced CO2 emissions.

All TT engines provide plenty of poke while the transmissions are also great to use; the manual gearboxes tend to be more reliable than the S tronic twin-clutch automatics. 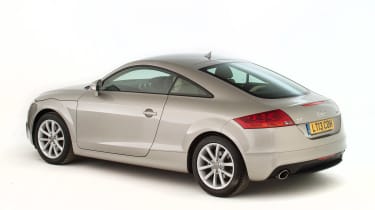 The 1.8 TFSI is always front-wheel drive. The 2.0 TFSI got optional quattro 4WD, while this was standard on the 2.0 TDI, TTS and TT RS. Equipment is never especially sparse, but there’s always been a long options list; check what any potential buy is fitted with. All TTs come with ESP, alloy wheels, Isofix child seat mounting points, climate control and electric mirrors and windows.

Alternatives to the Audi TT Mk2

The Peugeot brand might not have the same premium allure as Audi, but don’t dismiss the RCZ too lightly. It looks even sharper than the TT, plus it’s good to drive, well equipped and excellent value. Although there are no four-wheel-drive or roadster versions of the RCZ, some excellent diesel and petrol engines are available. 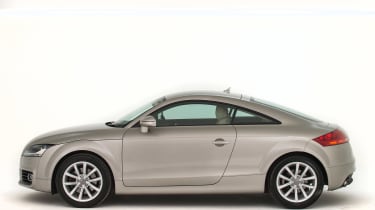 The Porsche Boxster and Cayman are sublime to drive but more costly, while the BMW Z4 is a great alternative with its coupe-cabrio configuration, superb driving dynamics and engines, and excellent build quality. For practicality, try the Volkswagen Scirocco – the engine choices are great and you don’t have to dig deep to buy one.

Front seatbases can sag, especially on models with leather trim. Audi has replaced some seats under warranty as the problem has been so common. 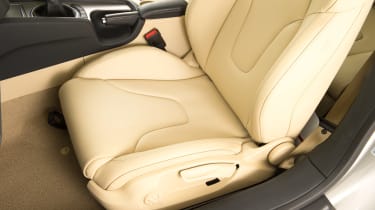 The headlamps are prone to misting up, especially xenon units after the car has been washed. You have to learn to live with this problem, unfortunately.

Some TTs come with factory-fitted parking sensors, some feature aftermarket kits, and some have none at all. Factory-fitted sensors tend to be the best option.

The window regulator mechanism can break, and this is especially likely on early models. Sometimes it just gives up; other times it develops a telltale creak before it fails. 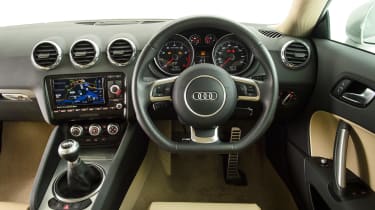 Nobody does interiors like Audi, and the TT is a fine example. It’s beautifully built, easy to use and comfortable. The Roadster has just two seats, while the coupé’s rear is for small children only. In fact, this version’s practicality isn’t bad; the boot holds 290 litres with the seats up, or 700 litres when they’re folded.

Most TTs have variable servicing, although fixed intervals (12 months or 9,000 miles) are optional.

The TT Mk2 has been recalled three times, which isn’t too bad for a decade-old car. The first campaign was in March 2008 and affected models built in January and February 2007. These could suffer from displaced trim. Then, in March 2009, TT RSs produced between May and July 2009 were called back as the brake servo could fail.

The most recent recall was in December 2009, for all S tronic TTs built from September 2008 to August 2009. The box was reprogrammed to prevent a loss of drive.

The TT Mk2 didn’t feature in this year’s Driver Power survey; last year it was in 183rd place, in 2014 it was 104th, and the last time it was in the top 100 was in 2013, when it managed 96th place. Owners ranked handling, braking and performance highly back then, but were critical of running costs and ride quality. 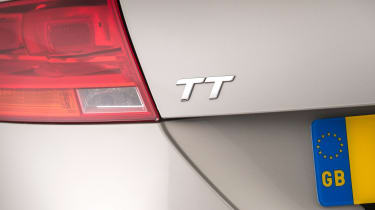 As you’d expect of any car that was launched in 2006, the TT Mk2 has aged, and while it’s not the sharpest car to drive it still looks modern and offers a healthy dose of practicality in coupé form, thanks to its hatchback configuration.

The TT is arguably the most usable sports car on a year-round basis due to the fact most editions get standard quattro four-wheel drive. However, it isn’t as comfortable as it should be, with firm suspension and (often) big wheels. You can’t assume cast-iron reliability, either.