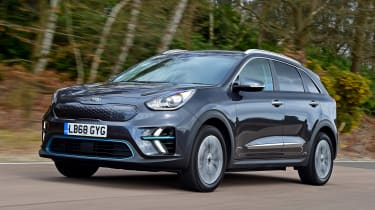 The number of plug-in cars on the UK’s roads rose 76.6 per cent last year to a record high of 195,410, according to the latest figures.

Data released by the SMMT (Society of Motor Manufacturers and Traders) shows that the number of AFVs (alternatively fuelled vehicles) also increased by nearly 30 per cent in 2018, meaning there are more than 620,000 hybrid, plug-in hybrids and fully electric cars in the UK.

Despite there now being a record 34.9 million cars registered in the UK – with more than 1,600 model ranges and 68,000 different specifications on the road last year – average CO2 emissions from cars in this country have fallen to the lowest on record, down 17.8 per cent compared with 2008.

Some 33.2 per cent of cars in the UK are superminis, making them the most popular class of car on the road, but dual-purpose vehicles (i.e. double-cab pick-up trucks) saw the largest growth last year, up 10.6 per cent. Family hatchbacks and saloons saw the biggest drop, down 4.7 per cent.

As of 2018, 20.1 per cent (roughly seven million) of cars were painted black, making it the most popular colour, followed by silver and then blue.

Female car ownership rose again, surpassing 2017’s level by 1.4 per cent, meaning there are now more than 12 million cars owned by women. The number of cars owned by men also increased 0.5 per cent.

Mike Hawes, chief executive of the SMMT, called for “a world-class package of incentives and infrastructure to give motorists the confidence to buy the latest, cleanest cars, whatever the fuel type, in the greater numbers we need to meet environmental challenges”.

Do you know a plug-in? Tell us about your experience below...