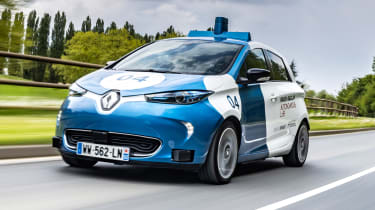 Renault, together with a number of French technology and transport companies, has designed an autonomous public transport system at the Paris-Saclay university campus.

By offering a self-driving night bus between half-past midnight and 3am, and three autonomous, on-demand Renault Zoe prototypes during the day, the project shows what current levels of autonomous tech are capable of in a relatively controlled environment.

The night bus operates at “commercial speed” and uses existing bus lanes. Running outside normal opening hours for public transport in the area, it serves four stops over a distance of around six kilometers (3.7 miles). The bus runs between Saclay Plateau – sometimes known as the French Silicon Valley – and nearby Massy train station. 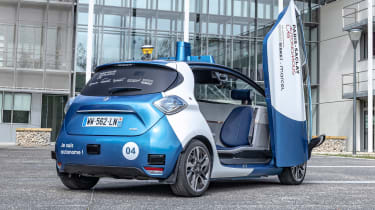 The autonomous Renault Zoe prototypes, meanwhile, are on-demand vehicles, summoned via a smartphone app, and are designed to shuttle students and staff around the Paris-Saclay campus to predetermined drop-off points. As a shared service, the Zoe will stop to pick up other users whose journeys fit in with the existing rider’s.

The experimental nature of the services means they’re not fully open to members of the public, but they will be “progressively made available to a panel of users.” Oversight of the Paris-Saclay Autonomous Lab project comes by way of a supervision facility located at the Massy train station.

While the two transport solutions are experimental at present, they serve to demonstrate how the current state of self-driving technology is capable – in prototype form at least – of operating within pre-defined areas. The choice of location is a logical one, with the Paris-Saclay campus and the Saclay Plateau home to numerous technology and autonomous firms and research laboratories.

The University of Paris-Saclay campus opened in 2015, and is past of a wider project in the area to unite a number of higher education facilities and businesses with the intention of rivaling established academic global technology hubs like MIT, Harvard and Oxbridge. Some estimates put the predicted value of connected and autonomous cars at £900 billion globally within just six years.

As well as Renault, companies involved in the project include the Transdev Group, IRT SystemX, VEDECOM and the University of Paris-Saclay, which launched the Paris-Saclay Autonomous Lab project. The experiments are part-funded by the French government, and are officially known as EVAPS: Eco-mobilité par Véhicules Autonomes sur le territoire de Paris-Saclay, or autonomous vehicle eco-mobility in the Paris-Saclay area.

Are you excited about the rise of autonomous cars? Let us know your thoughts below...