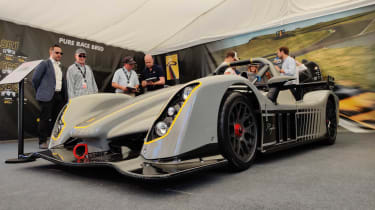 At this year’s Goodwood Festival of Speed, Radical has launched a new road legal sports car, called the Rapture. Like the British firm’s track only models, it features a lightweight space frame chassis, an FIA-compliant safety system and functional aerodynamics, along with a range of road-focussed creature comforts.

It’s powered by a reworked version of Ford’s 2.3-litre four-cylinder EcoBoost engine, as found in the Focus RS. Updates include an all-new turbocharger and air induction system, which provides the Rapture with 350bhp and 434Nm of torque. Unlike in the hot Focus, power is fed to the rear wheels via a six-speed sequential gearbox.

Radical’s claimed performance figures are impressive. Thanks to a dry weight of just 765kg, 0–60mph takes three seconds, 0–100mph is dispatched in 8.4 seconds, while the Rapture’s top speed stands at 165mph.

The Rapture’s composite bodywork features a functional front splitter, bi-plane rear wing and double-tunnel diffuser. It’s chassis is also fitted with a reworked version of Radical’s fully-adjustable ‘Nik-link’ suspension setup, which the firm says can be configured for both road and track use.

In a bid to make the Rapture easier to live with, Radical has fitted its cockpit with a pair of padded bucket seats featuring six point racing harnesses, along with such creature comforts as a heater, a courtesy light and a 12V auxiliary socket. The dashboard also houses an LCD display with data-logging functions and a multifunction steering wheel. 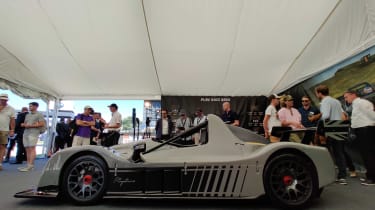 Radical Sportscars CEO, Joe Anwyll said: “Radical has always been a business to push the boundaries; in developing Rapture, we listened carefully to our global customer base to ensure that whilst road legal, the Rapture remains an undiluted, out-and-out track car at its core.”

Pricing information for the Radical Rapture will be announced shortly after the Goodwood Festival of Speed. The British manufacturer is currently taking pre-orders, with first deliveries expected to arrive by August this year.

What are your thoughts on the new Radical Rapture? Let us know in the comments section below…