‘How will the National Grid cope when millions of EVs are plugged in?’

After recent National Grid power cuts, Mike Rutherford thinks the UK is a long way away from being able to cope with the EV revolution 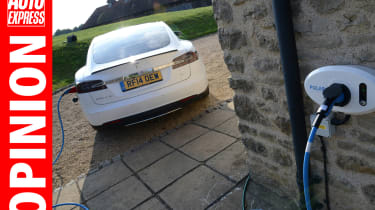 Last week, between 7am and 9.30pm, I was wheeled in by Sky, the BBC and LBC to discuss the four big motoring issues of the moment.

The first topic was the recent National Grid power cuts that incapacitated large parts of England and Wales. A North Sea wind farm failed at the same time as a power station in Cambridge.

If this is how the National Grid delivers electricity during the low-demand summer of 2019, when there are only a handful of electric vehicles around, how the hell can we be confident it’ll cope when tens of millions of EVs are plugged in every summer, autumn, winter and spring?

This is the most crucially important motoring-related question on the eve of the electric car revolution. And so far, at least, the National Grid doesn’t seem capable of adequately answering it.

Also guilty of being unable to give straight answers was a fully committed anti-car campaigner I debated with live on air the same day. He chose to give the firm impression to listeners that Britain’s air pollution crisis is at best mostly, or at worst entirely, down to emissions from cars. Truth is, the private car is a comparatively small part of the overall air-quality problem. With that in mind, would our motorist-loathing friend like to tell us about the industries and individuals who create the vast majority of toxic emissions? Er, no. He flatly declined.

On a lighter note, another radio station that asked me to talk about the misuse of parent-and-child parking bays at supermarkets seemed taken aback when I revealed that my 88-year-old dad occasionally parks in them when he takes me shopping. What’s the problem? He’s my father. I’m his son, so him parking up in the parent-and-child bay when I’m his passenger seems legitimate to me.

Back to more important matters. Iain Dale is arguably Britain’s best-informed, most politically aware and smartest real-world radio presenter. As a guest on his LBC show, I argued that the Transport Select Committee proposal for a new law to make hands-free phones as illegal as hand-held devices is plain wrong. Laughable, almost.

Dale went further by saying: “It’s a preposterous idea. What this cross-party select committee is doing is looking for a cheap headline.”

Initially, an IAM Roadsmart (formerly the Institute of Advanced Motorists) spokesman bravely swam against the tide by backing the plan to put hands-free phone users in the same shameful, guilty-as-hell camp as those with hand-held devices. But I pointed out that alleged offenders charged with the ‘crime’ of using their hands-free phones while driving will defend themselves by claiming they were singing, talking to themselves, or giving voice instructions to their dash-mounted sat-navs.

“It’s a nonsense and it’s unenforceable,” I said on air. “You’re 100 per cent right,” was IAM man’s instant, honest reply. I rest my case. Any further comment from me would be superfluous.