Mike Rutherford thinks October was a horrible month for drivers, motor manufacturing and motoring in general 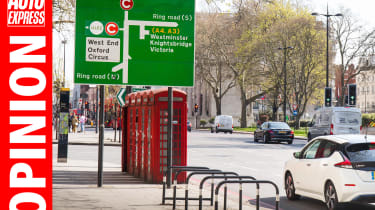 ’Orrible October, I call it. It was the maddest month for drivers, motor manufacturing and motoring, plus the thriving climate-change industry, road-closure obsessed bureaucrats and the filthy rich ‘enforcement’ agencies who rob us blind. Or try to.

Let’s start with one Ford Focus driver, who racked up fines of around £13,000 for failing to pay Ultra-Low Emission Zone charges in London, illustrating the scale of the potential profits for state or private enforcement agencies. It’ll be a fascinating legal test case. Why hasn’t the car been clamped, for example? And can we be surprised there’s now a mini-boom in sales of temporary/illegal number plates used by drivers understandably keen to dodge such fines?

As if motor makers don’t have enough on their plates, there were reports in October that car growth in the western world will now stop at current levels. And the theory is that it may never increase again  – not, I suspect, due to a lack of potential buyers, but because the war on car ownership and usership is being won by the politicians and ecomentalists.

On a similar theme, while drivers are increasingly priced out of their personal mobility machines on to public transport, environmental activists have been mindlessly sabotaging and halting the trains by, among other things, attaching themselves to the damn things with glue. Seems that unless we walk, or ride bicycles, we mustn’t leave our homes. But if we do stay behind closed doors, don’t you dare use those carbon-emitting wood-burning stoves or central heating boilers; and don’t be surprised if these are soon banned by councils.

Embarrassed and confused hypocrite of the month? Chris Hohn, the billionaire hedge fund manager, who was named as a major financial backer of the recent climate change protests. Yet on 19 October it was reported that ‘Hohn builds £630million stake in Heathrow’. No contradictions, conflicts of interests or double standards there then, eh?

Mid-October marked the revelation that two hard-working brothers from Blackburn are about to make £5bn by ‘floating their petrol station empire’. This confirms to me that if anyone thinks the game is up for unleaded and diesel, they are ’orribly mistaken.

October 31 was meant to be the concluding day of the longest running, most damaging divorce case in history (the one involving Britain and the EU). Surprise surprise, it didn’t happen. Instead, Peugeot of France effectively married Fiat of Italy (as well as Chrysler of America) on that day, to create what must be the motor industry couple with the largest number of famous and not so famous junior marques under its parentage.

While not an ’orrible event per se, can the happy newlyweds really justify designing, building and trying to sell small cars with Peugeot, Fiat, Citroen, Vauxhall, Opel, Abarth, Jeep and Lancia badges? Er, no. Not a chance. One or two must surely be orphaned off.

Still, on a happier note, at least Peugeot’s expensive quickie marriage to Fiat means it no longer has the time, money or energy to make a hostile bid for the affections of the English rose that is JLR. And this, with due respect to the French, has to be a good thing.