Karma has previewed its take on the electric hypercar arms race, with the 1,000bhp-plus SC2 Concept 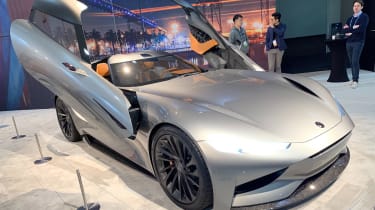 Karma Automotive has unveiled the SC2 Concept at this year’s Los Angeles Motor Show. The concept previews the company’s contender in electric hypercar market as well as  demonstrating the firm’s future design language and drivetrain technology.

The SC2 Concept it powered by an all-electric, all-wheel-drive powertrain, with a motor mounted on each of the coupe’s axles. The headline figures read: 1,085bhp, 14,000Nm of torque and a 0–60mph time of less than 1.9 seconds. The concept is powered by a 120kWh lithium-ion battery pack, which offers a claimed range of 350 miles between charges.

The SC2 Concept also previews Karma’s unique “Drive and Play” technology, which transforms the coupe into a driving simulator, allowing drivers to digitally re-live their previous drives. The system comprises an array of high-definition cameras and LIDAR sensors which can record drives in 360 degrees, within a 3D environment. 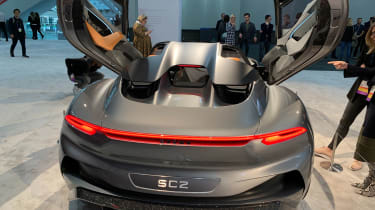 When parked, the SC2’s adaptive laser projector displays the surroundings of the recorded drive on the car’s windows, while a mounted smartphone acts as a virtual rear-view mirror. The driver can also share their experience across the Karma Drive and Play network.

The SC2’s styling adheres to the GT car rule-book, with a long bonnet, a short tail and a low roof-line. The concept also features fingerprint and facial scanners in place of conventional door locks, a pair of scissor doors, an LED-studded headliner and electrochromic privacy glass, which can switch from clear to opaque.

The SC2 was joined at the Los Angeles Motor Show by an updated version of the Karma Revero GT electric saloon, which is due for launch next year. It will be followed in 2021 by a new Karma global platform, which aims to secure the brand’s foothold in the electric market.

What does Karma Automotive have to beat? Read our run-down of the best electric cars on sale now…