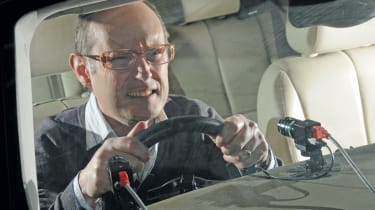 UK police forces are kicking off a crackdown on drivers without sufficiently good eyesight. Thames Valley, Hampshire and West Midlands police will conduct regular on-the-spot eye tests at the roadside on drivers they pull over. Anyone who can’t read a car numberplate at a distance of 20m faces having their driving licence revoked.

Currently, the only mandatory test of a driver’s eyesight is done before the practical driving test. From that point it is the responsibility of the driver to ensure that their vision is up to the required standard before getting behind the wheel. Licence holders are required to inform the DVLA if they have vision problems that may affect their driving.

Police have the power to contact the DVLA (Driver and Vehicle Licensing Agency) and request an urgent revocation of a licence for reasons of poor eyesight under a 2013 law dubbed Cassie’s law. The legislation was named after 16-year-old Cassie McCord who died when an 87-year-old driver, who had previously failed a police eyesight test, lost control of his vehicle in Colchester, Essex.

Police say that they will use the data collected under the new eyesight test scheme to gain a clearer picture of the extent of the problem of drivers on the road with defective vision. Speaking to the BBC on behalf of the three forces involved, Sgt Rob Heard said "Not being able to see a hazard or react to a situation quickly enough can have catastrophic consequences."

The eyesight test was introduced in 1937 and has been amended occasionally to reflect changing number plate sizes. Immediately before the driving test, the examiner asks the candidate to read a new-style number plate (beginning with two letters) on a parked vehicle 65 feet (20 metres) away, or an old-style plate at 67 feet. If that can’t be read, then the candidate is asked to read a second one. If they can’t read that, the examiner measures the distance to a third plate, and if that can’t be read, the driving test is cancelled, the DVLA is informed and the candidate’s licence is revoked.

When they first apply for a licence, and when they renew at 70, drivers must declare that they meet the minimum eyesight standard for driving, and whether they need corrective lenses to drive. They don’t have to confirm whether lenses are worn at each 10-year renewal. The law also requires all licence holders to inform the DVLA about any medical condition they have that may affect their ability to drive – including poor eyesight.

Are roadside eye tests for drivers a good idea? Let us know your thoughts in the comments section…