We've taken to the road in the Toytown Coupe, a super-sized version of the popular Cozy Coupe kid's car. How did it handle? 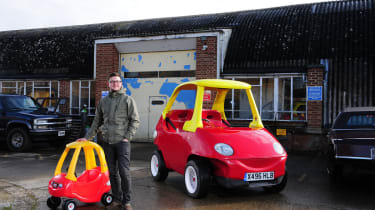 It was the best-selling car in the UK in 2013. No, not the Ford Fiesta; we’re talking about the Little Tikes Cozy Coupe. Around 143,000 examples were reported to have found homes last year, as the Cozy Coupe outsold the hugely popular Ford by more than 30,000 models. And even if, like me, you never had one as a child, chances are you’ll recognise it instantly.

But the children’s favourite has just grown up, with a garage producing a full-size working version – and Auto Express couldn’t wait to climb behind the wheel. 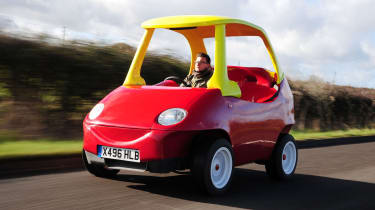 The car, called the Toytown Coupe, is the work of Attitude Autos in Ambrosden, Oxon, and mechanic John Bitmead came up with the original idea. John has dabbled in engineering and carbon fibre in his time, and wanted to build something that could showcase his talents, as well as the skills of everyone else in the newly founded company.

“We were trying to make something really outstanding,” he explains. “But it needed to be a car that would appeal to more people than any other car. It needed to have maximum impact – as wide an audience as possible.”

John’s first thought went to the Cozy Coupe. Even though he doesn’t have any children, he knew it was recognisable not only in the UK, but across the world. We certainly knew what it was the moment we clapped eyes on that yellow roof and red body – the likeness is amazing. 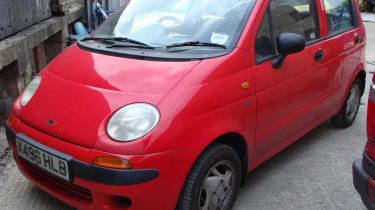 The red body used to be a Daewoo Matiz, which was bought for £400. This was the starting point for a project that took around 1,000 hours to complete.

Once the roof had been removed, as well as various other parts, one of the biggest jobs was to shorten the car, while retaining a single opening door, to mimic the children’s version. So the Attitude Autos team removed a middle quarter of the car, as well as the closing part of the rear driver’s side door, which was then added to the front door. Then it was simply a case of crafting the dramatic curve in the doors.

But while it’s impressive that the team went to such lengths, it’s the little details on the Toytown Coupe that really stand out – from the plastic screw-on fuel cap cover to the blue ignition key holder. Even the wheels are the same white design as found on the smaller version and the company may have annoyed some petrolheads when buying them from auction website eBay. “The wheels are for a Toyota Corolla GT – the kind of things that drift boys love – so we had to outbid a few of them,” John tells us. 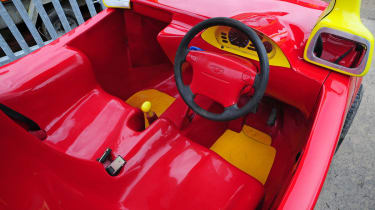 The interior is almost exactly the same as that of the kid’s version, too, bar the passenger seat. But that was a painful experience for John. “All the filling on the inside was done by hand,” he says. “I did so much, my hands were bleeding – and I’ve been doing it most of my life. It was the equivalent of doing what you would normally do for three cars.”

The thing that brings it all together, however, is the yellow roof – which, as John explains, was not only the most challenging part of the build, but also the most fulfilling when it was finished. “The roof was difficult because it was made from steel,” he says, explaining how he handed responsibility to his brother Geoff, who’s a panel beater by trade. “But when it was done and we got it on there, the contrast between the yellow roof and the red body was amazing.”

It’s clearly something of a spectacle and a hit with anyone who sees the car out on the road. “The car is approaching celebrity status,” John tells us. “You get so many people just smiling, and other drivers beep and wave. It’s a feelgood car that everyone recognises.” So now it’s my turn to witness that reaction first hand as I take the wheel – although because there’s only one door, I have to get out again to let our photographer climb aboard and slide across to the passenger seat.

The three-cylinder Matiz engine buzzes into life and we set off, but instantly, this feels like no Daewoo I’ve ever driven – as there are no windows. Thankfully, the rain has eased off, so all we really have to battle against is the cold. I’ve come well prepared with five layers, two scarves and a pair of gloves, although at 50mph the wind did give me cold cheeks and an interesting hairstyle. 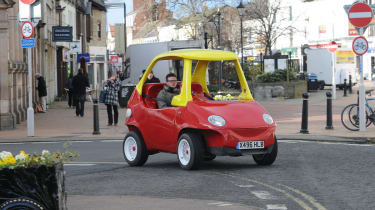 As we tackle a few corners, some of the car’s key features come to the fore. Firstly, it has a really tight turning circle. With the wheelarches almost completely removed (another key feature of the kids’ version), it’s incredibly easy to turn it round in a tight spot.

Take any bends at speed, though, and you won’t be able to ignore the high, heavy roof. It leans to a point where you think you could end up on your side – like Fred Flinstone’s car in the opening credits of the famous cartoon. But this all adds to the experience, and only serves to make driving the car more fun.

And that enjoyment isn’t just for the driver. While the likes of the McLaren 12C turn heads with their looks and engine notes, and something like the all-electric Renault Twizy two-seater leaves the general public flummoxed, this car stops people in their tracks – and instantly they know what it is.

The Toytown Coupe really does have celebrity status. When we made a quick filling station stop, fellow motorists were taking pictures on their phones and telling us how they’d seen the car on TV. And when we drove around the small square in Bicester village, the car got a similar response, seemingly raising a smile on the face of every bystander. And these were mostly adults – so imagine the reaction of children.

During our test drive, we passed a primary school as the gates opened at the end of the day, and nearly caused a riot! Children and parents alike gazed open-mouthed at the full-size, fully working version of the car they had at home. 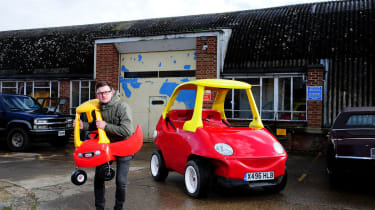 So the Toytown Coupe certainly attracts plenty of attention – and it’s good to hear that John doesn’t just plan to use the car to promote his business. “We’re going to try to do some stuff for children’s charities,” he explains. It’s already booked in for some car shows across the country, as well as some local fêtes in the summer, plus John has  bigger plans, adding: “One of the ideas is to drive it from John O’Groats to Lands End, or visit all four UK nations in the car.”

Hopefully, John and Attitude Autos can cash in on this fame to raise thousands for charity – not that any of the team are going to sit around and enjoy the finished project, as work has already begun on the next creation.

“We’re going to build the Addams Family’s Creepy Camper, and we’ve already started on the tile roof,” John tells us. Having seen first-hand the expert job he and his team have made of the full-size Toytown Coupe, this car could be a sight to behold on the quiet roads of rural Oxfordshire.

What do you think of the Toytown Coupe? Would you drive one down your local high street? Tell us in the comments section below...