The Bloodhound LSR car is being prepared for its first 500mph shakedown run at the Hakskeen Pan desert, Northern Cape 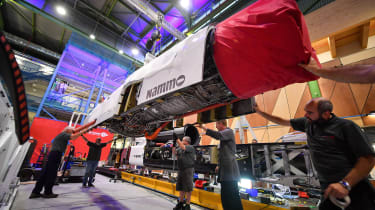 The Bloodhound Land Speed Record car is being readied for its first 500mph shakedown run at the Hakskeen Pan desert in the Northern Cape of South Africa. The data gathered by the test runs will be used to prepare the Bloodhound for a crack at the current land speed record of 763mph (set in 1997 by Thrust SSC) in autumn 2020.

The project’s forthcoming test runs will see the Bloodhound LSR car build speed over 13 runs in 50mph increments between October and November of this year, before attempting a 500mph-plus run. Should the attempt be successful, the Bloodhound will become one of the world’s top ten fastest ever cars.

Bloodhound is powered by an EJ200 jet engine, produced by Rolls Royce. It’s lifted from a Eurofighter Typhoon fighter jet and generates nine tonnes of thrust – enough to take the Bloodhound to 600mph. A rocket engine will provide the extra punch to allow the car to break the sound barrier and reach 800mph.

Providing all of the project’s planned tests and record attempts run smoothly, the final phase of the programme will see the Bloodhound LSR team aim for an even faster 1,000mph run in autumn 2021. The current tests will see the car run with only the jet engine, with the rocket being added for the 2020 and 2021 record attempts. 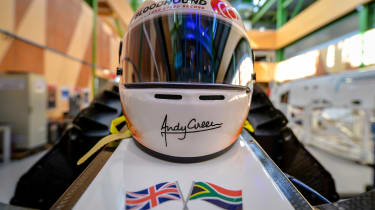 RAF Wing Commander Andy Green, driver for the Thrust SSC record run in 1997, is also the driver for the Bloodhound project. "The car has been designed to do 1,000mph, so we're going to be stepping up through the speed range over the next couple of years," he said.

Almost 200 sensors located around Bloodhound SSC will record the pressure and forces exerted on various parts of its structure; this data will then be analysed by students at Swansea University. "We have to do this digitally because there's no such thing as a wind tunnel with a supersonic conveyor belt," Green explained.

The bulk of the 6.4 tonne Bloodhound Land Speed Record car will travel 5,550 miles from the UK to South Africa via air freight, to ensure it isn’t damaged in transit. Its two metre high tail-fin and sections of its composite bodywork will be removed for the journey. The car’s support equipment has already started its journey to the Hakskeen Pan by sea.

For testing in South Africa, the Bloodhound’s wheels will be changed from conventional alloys and air-filled tyres to solid aluminium discs, which will better cope with the additional forces brought on by the higher speeds and desert environment.

The solid wheels weigh 90kg each and were specially commissioned by Castle Precision Engineering, who ensured they conform to Class G2.5 standards for rotating unbalance – the same as aircraft turbine blades.

Work had already been completed by the local government and community in South Africa to prepare a track for the car before the project stalled, with 16,000 tonnes of stones removed from a 20-kilometre strip of land in the Kalahari Desert over a seven-year period.

The Bloodhound project was bought out of administration earlier this year by the Barnsley-based entrepreneur Ian Warhurst. Speaking at the announcement, Warhurst said: "Since revitalising the project in March, we wanted to be sure we could do this before announcing anything. Our team has been working to get roadblocks out of the way.”

Green commented: "Ian taking over gave us not only a financial kickstart to get things moving, but also restructured the company and reorganised some of the positions to turn it into a much more operationally focused organisation that can run the most advanced prototype straight-line racing car in history. 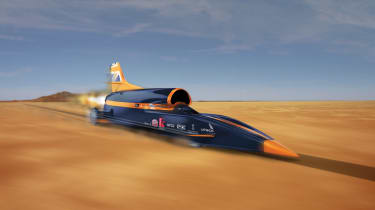 "It also provided leadership, drive and inspiration to a team of people who six months ago thought everything they've done to get the car ready was about to be chopped up and thrown in the bin. It has been a dramatic turnaround over the last few months."

Although Warhurst is supporting the project financially, to ensure it can continue to run and hit its targets without being held up by cash flow difficulties, sponsorship and partnership opportunities are still available. The car is currently finished in a plain white livery, offering ample space for further advertising.

Are you looking forward to Project Bloodhound’s 1,000mph record attempt? Let us know in the comments section below…