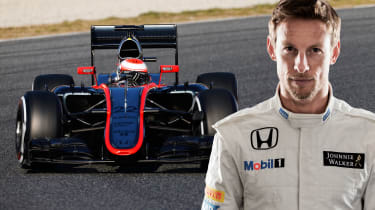 Can anyone stop Mercedes? That’s the question on everyone’s lips as the 2015 Formula One season blasts into action this weekend in Melbourne, Australia. Reigning champion Lewis Hamilton and his bitter rival Nico Rosberg are expected to once more fight it out for the title – but could previous champions Sebastian Vettel at Ferrari and Fernando Alonso at McLaren have anything to say about that?

Of course, Alonso isn’t the only past champion at McLaren – 2009 title holder Jenson Button is still there and keener than ever to get racing. We caught up with him at the recent Geneva Motor Show to find out how the McLaren-Honda partnership is shaping up, and how he feels about going head-to-head with Alonso in the same team. 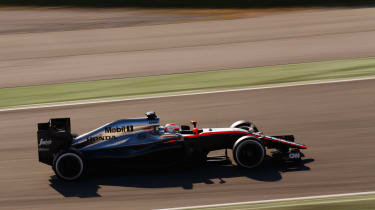 It is different, but I think it’s different because the power unit is so different. Back then it was just a straightforward V10, then a V8 – now it’s a turbo with electronic motor so there’s a lot more for them to get their teeth into and it’s been really interesting to see how they’ve gone on with that.

We have had issues in testing, but it’s about learning from those issues and making it better. The good thing is it’s very open between McLaren and Honda and we see everything so it’s great, we’re working together and you’ll see massive improvements from us throughout the year. I love working with Honda as I did in the noughties – we had some great times and some tough times. Some of the cars weren’t as pretty as perhaps they should’ve been, but the thing I love about them is they’re so passionate about motor racing, from Mr Honda all the way through. They’ve always thought of motor racing as the pinnacle and they build road cars to go motor racing, not the other way around and that’s what I love about them.

What are you most looking forward to this year?

The start of the season – we’re not going to be fighting for a win, but I think maximising what you have is all we can do right now and I love the start of the season. Albert Park is cool, there are good crowds there, I’ve won there three times so good memories for me.

How much has Formula One changed over the past 16 years? 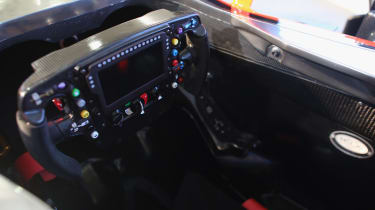 Are the cars easier to drive these days?

There so technically advanced these days – physically, yeah, they’re not as hard, they’re much easier than they were ten years ago. But mentally they’re a lot tougher – there’s so much more going on and so much more to work with and to adjust, which is good. I like learning new things and you never stop learning and in Formula One there’s always more to learn.

Last year I tipped you to win the championship… Should I do that this year?

No. Why did you do that? Did you not see winter testing? We are a good chunk behind Mercedes – I think everyone is. They’ve done an amazing job once again. It was always going to be difficult for everyone to close that gap and for us we’re in a very different situation – most people have arrived with their car thinking they can tweak it through the year. For us, you’ll see big improvements, big chunks of lap time improvements. 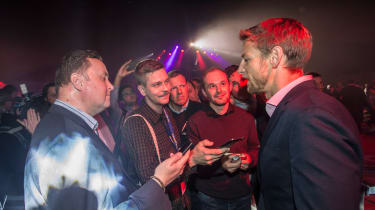 It’s an exciting position to be in, tough at the beginning, but definitely exciting. I’d rather be winning grand prix, of course, as every single racing driver would, but some times it’s just as exciting to build a team up and to see the development and to see the dream in the final stages, so it’s a lot of hard work right now, but we’ll get the results they want.

Reliability problems aside, do you sense that your new car is quick?

That one’s tricky – I can sense that it’s got a good feel about it definitely. A driver knows when he gets in the car and it feels more complete than last year’s car already – you jump in it and everything just feels right. It’s predictable and that’s the most important thing right now. Now we’re not quick and there’s a lot more work needed for us to be quick, but the basic car is good.

If we get to the end of the year and we’re not quick enough, we just haven’t put enough pace into the car, but the basic car is very strong, it’s got a very good base. Aerodynamically it’s sound – it’s really good with the airflow so you don’t have drop-outs of aerodynamics through corners. That’s a massive thing, for a driver to have a predictable car means he can push it and find the limits.

Do you think McLaren has changed with Honda coming on board?

The partnership with Mercedes was a great partnership, and we won many grand prix. But when you’re the sole team working with a manufacturer you share every detail of information and both Honda and McLaren are amazing organisations. When you put them together they help each other in different ways. It’s very open and that’s the most important thing. That’s the way you’re going to get the best out of the power unit and also the car. 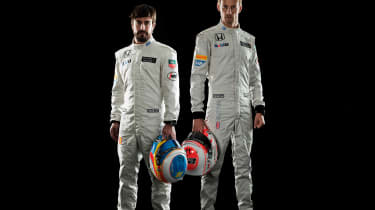 How do you feel about going up against Alonso?

In testing you can’t compare lap times – you’re always running different fuel loads and different tests. I’ve got a lot of respect for Fernando – one because we’ve been through a lot together over the years, in different categories and different Formula, and he’s an intelligent guy.

I like the way that he goes motor racing – it’s not just about one lap, he understands the bigger picture of building a team around him. I’m looking forward to the partnership – we’ve got 500 Grand Prix between us, which is pretty important when it comes to the development of this car. In the end we want to beat each other – that’s Formula One – but right now we’re working really well together.

Which circuit do you enjoy most?

Suzuka – I love the layout of it. Spa’s awesome, but if you could only have one it would be Suzuka for me – you’ve got the esses from turn two, up the snake to turn eight that’s such a flowing part of the circuit…

Nigel Mansell famously used to say the crowd at the British Grand Prix are worth a second a lap. Would you agree?

There are two ways of looking at that: yeah, they do give you support, which is great and I love racing at Silverstone – it’s the most special race because of the crowd support. But if it gave you a second, it means you’re not trying hard enough at the other eighteen races. I terms of lap time, it doesn’t change anything, but it’s such a lovely race. 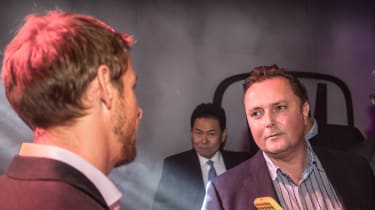 I look forward to it most because the British public aren’t just supporting the British drivers, they support everyone – there’s a really nice atmosphere and that’s so important. We’re not racing for our countries, it’s not like the Olympics, it’s very different as we’re racing for the world championship as individuals and as teams. But having support wherever you go means so much to us drivers because we’re trying to put on a good show.

How’s being married going to affect you as a driver?

For me having the support of Jessie really means a lot to me. I love having family and friends, and now my wife, supporting me at the race, especially when times are difficult. It’s really important for someone to share the pain with you, and also be there in the good times so I think this’ll help me in terms of the support I get.

When the two of you go out shopping or socially, who drives?

She’s got a license, but I definitely wouldn’t put her behind the wheel when I’m in the passenger seat. I am the worst passenger ever, I really am.

Do you have any tips for young racing drivers?

Slow down – don’t get to Formula One too quick. Not because I don’t want to leave the sport but you got to enjoy it. There are so many categories along the way that are so much fun: karting, I did Formula Ford and Formula Three. A lot of guys are jumping straight into F1 cars after doing one year in single seaters. That’s great because if you get the opportunity you have to take it, but they shouldn’t be given the opportunity. 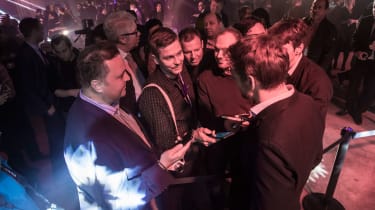 They should be learning about motor racing in the lower ranks, then when you get to Formula One you’re more ready for it. With Verstappen I think he’s going to do a great job, he’s a great talent, but is it the best thing for him jumping into an F1 car now? If he does really well, it could make the sport look bad and if he doesn’t do well it could be the end of his career, so it’s a tricky one. I think the important thing is to enjoy the lower ranks and learn as much as you can in those.

What’s your advice to young people just about to take their first drives on the roads?

It’s always easy for me to stand here and say you shouldn’t be driving fast on the road, do it on the race circuit, but most people don’t get that opportunity. I think if people do get an opportunity to drive on a circuit, even if it’s just a driving school it’s worth doing just so you understand what a car can do and how it can bite you. Most kids when they jump into a car and want to drive fast, they don’t know what’s going to happen until it’s too late and then something serious happens. For me the important thing is to drive safely on the roads, but also to understand what you’re driving.

What can you do as a driver to influence the Honda road cars people are going to buy?

Well hopefully I’ll be able to drive [and develop] the NSX.

Have you still got an NSX?

No I did have one for a couple of years – that was a great car. I put it in the gravel trap at Brands Hatch, the only road car I have! Apart from that, it was awesome. It was an amazing bit of kit. 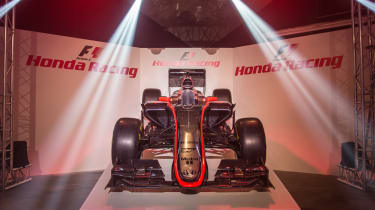 What do you think of Honda’s new models?

The NSX looks beautiful and the Type R looks unbelievably aggressive – really cool. I’ll be driving the Type R later this year so it should be a lot of fun. Most of the time when you see prototypes at shows like Geneva and then you see the actual car and it looks nothing like it, but this looks just like the prototype, which is so cool. That car will have a cult following, definitely. It’s good to see Honda building something like that.

My daughter asked what happens if you want to go to the toilet in the middle of a race?

See the video above for the audio clip!

That’s a good question. There’s the easy answer… And for some reasons drivers always used to do that – a couple of my ex-team mates were famous for weeing in the car, I can’t remember which ones but I think he was Canadian, but now, no, we can hold it in – we’re well practiced.