We take part in a training exercise that prepares fire crews for the reality of road accidents, as UK teams gear up for world competition 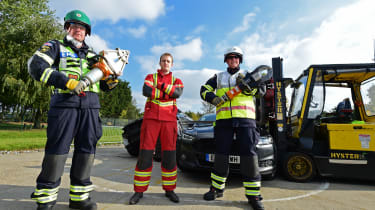 Two cars speared by a forklift truck, a Ford Mondeo on its roof and two trapped passengers – it’s a nightmare scenario. What makes it worse is that we’re one of the passengers, moments away from passing out, and buckled into the seat of a car precariously balanced on two wheels.

Don’t worry, though, this isn’t a tale of one of our road tests gone terribly wrong, but part of the extraordinary training the UK’s finest fire crews go through to stay on top of their game – and to prepare for international competition. 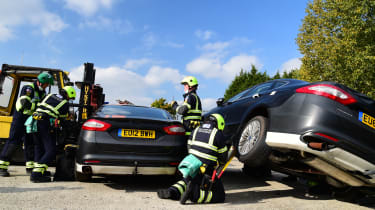 Auto Express was invited to be part of one of these live sessions at Ford’s Dunton Technical Centre in Essex, ahead of the World Rescue Organisation Challenge in Portugal. Essex County Fire and Rescue was one of the teams selected to represent the UK, and would be attempting to rescue us from our perilous pile-up involving three cars and a forklift truck.

We had a role to play, too. We were given imaginary neck and hip injuries to relay to the crew when it arrived, before pretending to become suddenly unconscious in order to force the team to undertake a rapid extraction. The crew wasn’t aware of our injuries beforehand, and was judged on its ability to identify what was wrong before successfully and safely getting everyone out.

A whistle signalled the start of the challenge, the fire engine charged around the corner and the crew sprung into action, with members of the team shouting instructions to one another as they assessed the scene. One attended to us and asked for a rundown of our personal details and where we were in pain. At first, we were just pretending to experience spinal and hip injuries, plus some neck soreness. This continued for a few minutes until we received a surreptitious nod from fire assessor Adrian Richardson, prompting us to ‘pass out’. 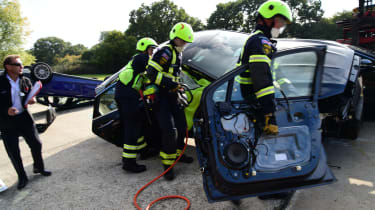 Seeing our head drooped and no longer able to respond to the questions of the rescue team, the crew decided we needed to be extracted immediately. A sheet was pulled over our head to protect us from any debris and a huge bolt cutter was used to take the door off the stricken Mondeo.

These days, fire and rescue teams’ first reaction isn’t to take off body panels, but in this case, the crew members couldn’t place their hands on the socket to unscrew the Mondeo’s door, so they decided that speed was the priority.

We were then lifted by three firefighters on to a spinal board and eased out horizontally through the door. The crew handed us to the paramedics and it was job done. 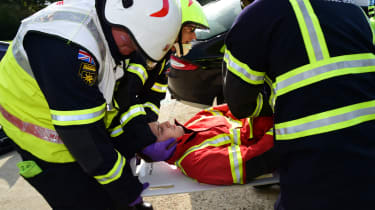 We then got to see the other casualty, who was trapped in the back of the car that had been speared by the forklift. To complicate matters, he was playing the role of a diabetic, who hadn’t eaten since breakfast.

Now all the crew members focused on this injured driver, and worked tirelessly to clip the pillars and peel the whole roof back. The front seat was cranked forward to release his trapped foot and the volunteer was then levered out over the boot and on to a spinal board as well.

They were dramatic scenes, but everything was choreographed perfectly by the accomplished team of Essex firefighters and wrapped up in around 30 minutes.

It was tough work nonetheless, and once they’d finished, the sweating crew members were glad to remove some of their heavy protective gear and grab a drink. 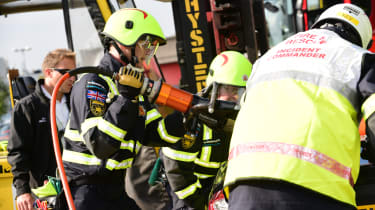 This also gave us a chance to find out more about the competition. We might have been part of the training day as preparation for the international contest, but it’s not just beating rivals that inspires the fire crews to be better.

Nigel Dilley, Essex County Fire and Rescue team manager, explained: “All these techniques and the equipment used for competition are being passed down to fire stations who deal with this type of thing on a daily basis.

“Doing practice sessions, we can try out new techniques. We used to send new equipment out to stations for evaluation – now we can calibrate it here.”

Getting practice on modern cars via its partnership with Ford is vital, too. Vehicle bodyshells and chassis are increasingly made with ultra-high-strength boron steel, and are becoming tougher to cut through, so new ways of working need to be found. Cars also have more electronics than ever before, while multiple airbags pose a potential problem, especially if one has gone off and another is dormant. The growing breed of electric and hybrid engines brings its own issues, too. To help, Ford supplies new and prototype vehicles to crews before they’re scrapped. 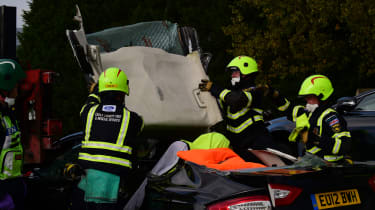 Dilley explained: “Cars are more of a challenge. The traditional ‘roof-off’ technique is no longer the only option. We can take panels off because we know the structures of the car – working with Ford gives us an opportunity to look at cars in the design stage, so we can work out the extraction techniques around it. This gives us a heads-up because we’ve already seen what problems wewill have before we get to the scene of an accident.”

Paul Fay, Ford vehicle expert, told us it’s a two-way street, too. Training sessions have flagged up potential issues in building the cars. One example that will be looked at by designers following a rescue training session is how to access a boot that has an electronic latch which can’t be opened from the outside.

“Because we have such a close partnership, we have had a chance to do some of the training exercises and we can see first-hand the challenges they face and what the equipment can or can’t do,” Fay told us. “We can feed this back to the design of new cars.”

All the hard work paid off, because Essex went on to finish a respectable 14th out of 34 in the World Rescue Organisation Challenge. Hampshire, which also works with Ford in training, was the best of the Brits, coming second overall, just behind the Portuguese team.

Dilley said: “For a local level, the people of Essex [and Hampshire] have one of the top teams in the country.”