Official: the Cedar Rocket is the world's fastest log

The ‘Cedar Rocket’ is no Beech buggy, but it has just taken the world record for the fastest motorised log 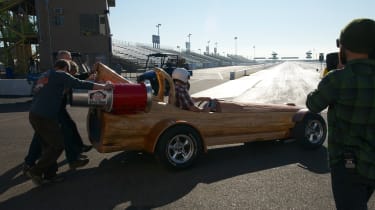 Certain species of bamboo are able to grow up to 3 feet within 24 hours - making them the fastest movers in the tree world. But now a group of Canadians have managed to better that by some margin. By building a vehicle within a single section of Western Red Cedar, Bryan Reid Sr. and his team have managed to take the Guinness World Record for the world’s fastest motorised log. Their vehicle managed two runs of 55mph over a quarter mile course to claim the title.

The ‘Cedar Rocket’ is the brainchild of HGTV’s Timber Kings, a reality-style program that normally follows companies building huge, luxurious cabins for millionaire customers. Used to that level of attention-to-detail, star of the show Bryan Reid Sr. would never be content with simply strapping axles onto a log, and, so with the help of an electric turbine manufacturer and a mechanic, a sophisticated set of underpinnings were created for his log car. 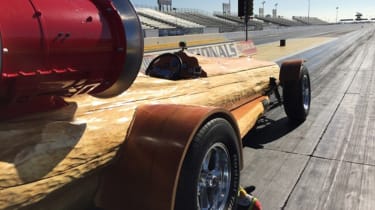 The bulk of the Cedar Rocket's mechanicals come from a Mazda RX-8 sports car. Gerald Overton, the mechanic, modified the brakes, axles, frame and differential so that everything would fit.

Initially the group intended to fit an air-cooled engine and keep the Mazda’s gearbox in place, but after realising the issue with placing a fuel tank in a wooden show car, they settled on a fully electric powertrain. Bryan Reid said: ‘Then we started thinking, man, this is 2016, and that’s why we went totally electric.’

Because the Cedar Rocket uses electric turbines, it’s not a drag racer. The turbines take a while to ‘spin up’ – meaning that while acceleration isn’t scintillating but the team are confident that the car could go up to 130mph given a long enough stretch. That would leave many modern production cars eating its sawdust. 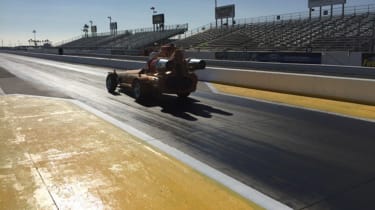 Still, the car achieved two runs of 55mph at the Wild Horse Pass Motorsports Park in Chandler, Arizona, which is respectable for any homemade car, let alone one lugging around so much timber.

The aim of the vehicle isn’t to be a racer, though. After a tour of the US – including car shows like SEMA – the Cedar Rocket will be auctioned by Barrett-Jackson next year, with all proceeds going to vetarans groups. It remains to be seen how much the vehicle will sell for, but it’s a worthy cause regardless.

Are we barking up the wrong tree with internal combustion? Electric logs could be the future - let us know what you think in the comments below...