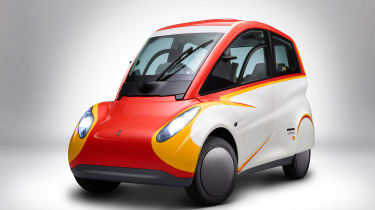 Shell has released details of its new 'energy efficient concept car', originally designed by Gordon Murray. The three-seater city car is capable of 107mpg thanks to a 660cc three-cylinder petrol engine.

It is a heavily adapted version of the T25, created by Shell working in partnership with Murray's design under the Shell Project M banner. Efforts have been made to improve the car's efficiency and the new version debuts a bespoke engine lubricant as well as a distinctive livery in the Shell brand colours.

• Project M: inside story of the Shell/Gordon Murray concept car

The Shell Concept Car weighs a mere 550kg (80kg less than the T25), and is built using a recycled carbon-fibre composite body and a tubular frame. The firm's updates over Gordon Murray's patented 'iStream' design include improved aerodynamics, too. 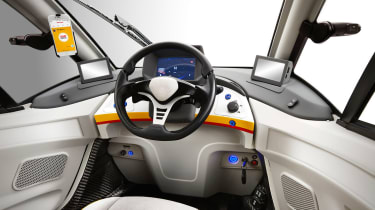 The petrol engine has also been redesigned internally for less friction and greater efficiency, helped by a new formula of lubricant. The prototype Shell 'Helix' Ultra low viscosity oil works with a bespoke transmission fluid to deliver a 5% economy improvement on its own. Combined with the affects of the car's reduced weight and aero tweaks, this gives a total boost to efficiency of 8%, meaning a 107mpg figure at a steady 45mph.

Dr. Andrew Hepher, Vice President of Shell's lubricant research team, made no claims about intent for production right now. Instead, he claims the purpose is to "accelerate the conversation about how we make road vehicles more energy efficient and less carbon-intensive".

What do you think of the Shell concept car? Let us know in the comments section below...