Google and FCA unveil production version of autonomous Pacifica hybrid, with 100 lined up for production. 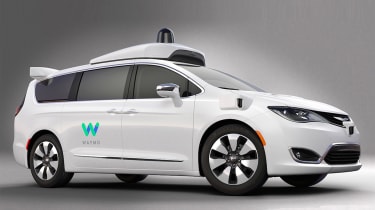 Google and Fiat Chrysler announced a partnership to develop autonomous cars back in May, and these are the first images of the finished production model. Around 100 of the Pacifica MPVs will be produced initially, with special bodywork adaptations and the full suite of driverless tech.

The Pacifica in these images features distinct lumps and bumps on the bodywork containing the numerous sensors, computers and electronics necessary for it to function by itself (under supervision). Engineers from the Silicon Valley tech giant and the US/Italian carmaker combined forces earlier this year at a facility in Michigan. 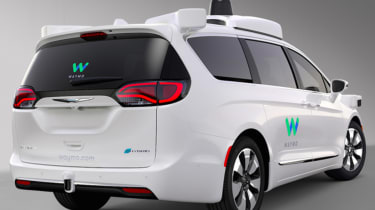 This marks the first time the tech giant has worked with a traditional car manufacturer since the beginning of its autonomous project in 2009 – though its current test fleet numbers around 70 vehicles and includes the hybrid Lexus RX 450h.

• Google car: the news so far

The choice of an MPV or minivan as a self-driving testbed is a calculated one, as Google would like to see autonomous vehicles compete with public transportation rather than private cars. Chris Urmson, director of Google's autonomous driving project, said "Public transit executives could be buying autonomous minivans rather than expensive buses."

Google's own written statement cited practical reasons for the choice, with Chrysler redesigning the innards of the Pacifica to fit hardware, while "the minivan design gives us an opportunity to test a larger vehicle that could be easier for passengers to enter and exit, particularly with features like hands-free sliding doors."

As MPVs go, the Chrysler Pacifica is as modern and tech-laden a choice as Google is likely to find. Showcased for the first time at the Detroit Motor Show, the Pacifica replaces the Town & Country (known as the Voyager in the UK) and is positively loaded with clever features, including an optional vacuum cleaner in the second row, rear-seat screens with HDMI inputs, and an 8.4-inch Uconnect infotainment display up front. 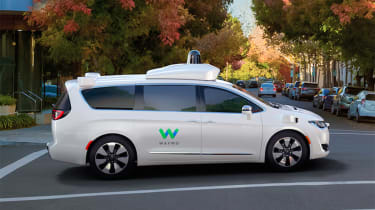 While standard models of Pacifica are on sale now with a 3.6-litre V6 engine, Google will be taking delivery of the hybrid model. This pairs the same V6 engine with a 16kWh battery which allows for 30 miles of electric-only range. This means the Pacifica Hybrid can hit 36mpg on the combined US cycle – though it's worth noting that US testing procedures tend to produce a lower mpg than those in the UK.

• The best of the Detroit Motor Show

Both Google and FCA confirmed their commitment to fully autonomous vehicles, and Google has lobbied for removal of regulations which require an autonomous car to have both a steering wheel and brake pedal. It's not clear when tests of Google's Pacifica hybrid fleet will begin, but now the car has been revealed expect to see a few hit the streets in  the next few months.

Would you take an autonomous MPV over public transport? Let us know in the comments below...