‘Disintegrating II’, the latest collection of exploding car images from Fabian Oefner, is on display now in Dubai 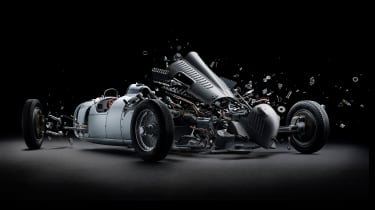 The MB&F M.A.D. (Mechanical Art Devices) Gallery in Dubai is playing host to a series of prints by Swiss artist Fabian Oefner. Named ‘Disintegrating II’, the collection show some beautiful cars in ways you've never seen them before.

It’s too easy to look at pictures of Fabian Oefner’s ‘Disintegrating II’ exhibition and shed a tear for the beautiful cars blown to kingdom come in the name of art – but don’t worry. While ‘Disintegrating’ does show beautiful racers including a Ford GT40, Bugatti Type 57 and Maserati 250F, the cars in question are scale models. No priceless motorcars were harmed in the making of these amazing images. 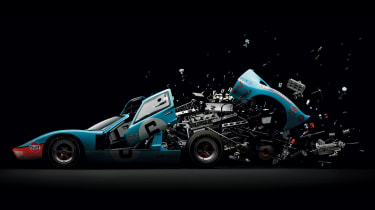 Oefner began by sketching out on paper where each individual piece of the exploding car image would go, then after painstakingly disassembling an intricate scale model he photographed each piece in its own place – held there with tiny needles and pieces of thread. After that came hours and hours of post-production to stitch the individual pictures together, giving the illusion of a single disintegrating car image.

Oefner says the finished product is one of the slowest ‘high-speed’ images ever, with each one taking almost two months from start to finish – including an entire day to dissect the scale models. ‘But that’s a bit of a boy thing,’ says Oefner. ‘There’s an enjoyment in the analysis… like peeling an onion.’

‘Disintegrating II’ is the successor to Oefner’s first exhibition, which went on display in Geneva in 2013. There, he ‘exploded’ a stunning 1961 Jaguar E-Type fixed-head coupe, in black, along with an iconic 1954 Mercedes 300 Uhlenhaut Coupe (complete with gullwing doors) and a 1967 Ferrari 300 P4 Racer.

This time, however, Oefner has concentrated on racing cars.  He begins with an iconic 1936 Auto Union Type C, equipped with a 6.0-litre V16 engine. Next up is the V12 Maserati 250F Formula 1 car from 1954, followed by the legendary Ford GT40 Le Mans racer from 1969.  Also in the exhibition is a superbly sleek Bugatti Type 57 and a 1982 Porsche 956 – the car which still holds the all-time lap record on the Nurburgring.

What do you think of Fabian Oefner's 'Disintegrating II' images? Let us know in the comments below...