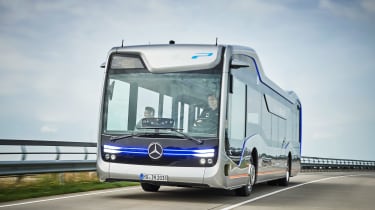 Mercedes has shown off its latest-generation autonomous technology – and rather than debuting on a luxury saloon, or perhaps a high-tech electric car, the testbed was a bus. The new ‘CityPilot’ system is capable of travelling safely in urban conditions, mixing with pedestrians and other traffic. Mercedes recently proved the technology works by taking a bus equipped with CityPilot on a 12 mile journey with no human input.

Based on the standard Citaro bus found in cities all over the world, the ‘Future Bus’ as Mercedes calls it won’t be completely trusted to drive itself just yet. For the moment, a driver is still required, and any input by him on the pedals or steering wheel instantly cancels out the vehicle’s own choice and puts the driver back in control. Yet on the test route it mixed with other traffic and obeyed traffic laws including red lights. 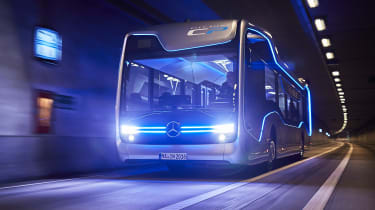 Its sophisticated sensors also allow it to be more exact when pulling up to pick up passengers, always maintaining the correct distance from the curb and negating the need for reinforced tyre sidewalls as on conventional buses. All-round vision is provided by cameras, while there’s even a photoelectric barrier to tell the bus whether passengers are getting in or out.

One of the most interesting features of CityPilot is called V2I – or vehicle to infrastructure tech, which allows the bus to communicate with the traffic signals themselves. While it’s only in its infancy, V2I could improve the safety of autonomous vehicles in the future.

Of course, Mercedes wouldn’t put sophisticated self-driving technology on just any bus, so the Future Bus features an interior unlike any public transport you’ve ever seen. Forget dull rows of seating with horrible upholstery – the Future Bus is laid out like a living room, with long seats, ‘organic’ design features, and masses of glass. It seems almost every horizontal surface has a wireless phone charger built-in, while the grab handles sprout up to the ceiling like vines in a greenhouse. 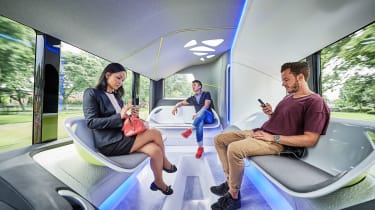 The outside hasn’t been left alone either, with geometric patterns and a Tron-style light signature along the front and sides.

The Mercedes Future Bus with CityPilot won’t be operating on your local route anytime soon, but it’s an interesting look at what the future of public transport could hold.

Would you ride an autonomous bus? Let us know in the comments below...