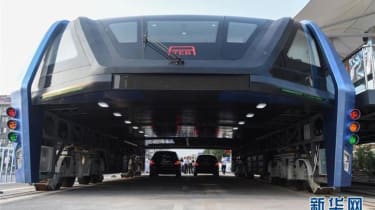 The project that brought us the TEB-1 bus - which caught the imagination of people around the world last year for its ambitious approach to easing urban congestion - has been shut down, with reports suggesting that the venture may have set up to fraudulently attract investment.

Chinese authorities are said to have arrested 32 people connected to the TEB-1 straddle bus for illegal fundraising, a development which follows concerns over the build quality of the full-size test model that engineers constructed last year.

First revealed in 2010, the bus promised to beat traffic by tiptoeing over it with wheels at the edges of the road, acting rather like an enormous tunnel that could ‘swallow’ the traffic that passed underneath.

The first test drive took place in August 2016 in the city of Qinhuangdao - located in the Hebei province of China - and while it was a far cry from the tiny models and CGI renderings we’d seen before, some of those present were still sceptical of both the design and execution of the vehicle.

The maiden run was limited to just a 300 metre route, and though more challenging tests were planned, it appears that the TEB-1 straddle bus has now reached the end of the line.

At 21 metres long and 7.6 metres wide, the bus-come-train straddled two lanes of traffic, and the passenger compartment of the TEB-1 (Transport Elevated Bus) was designed to with a capacity of 300 passengers. With the ability to link up to four TEB-1s together, it was hoped that up to 1,200 people could travel together – a feat that would require 15 double decker buses to achieve.

Had the bus come to fruition, passengers would’ve sat in 18 seats down either side of the passenger compartments, as well as circular seats in the middle capable of seating ten passengers each. There was also a huge significant amount of standing room for busier times.

Engineers told news outlet CCTV at the time: ‘The TEB-1 has the same functions as the subway, while its cost of construction is less than one fifth of the subway.’

Despite their assurances, concerns remained over the viability of the TEB-1 as a real solution – particularly in how it would handle vehicles turning off or onto the roads below. It’s also unclear how taller vehicles would pass the TEB-1 – a stuck lorry would’ve had the potential to cause lengthy tailbacks. Alas, it seems, the TEB-1 terminates here.

Was the ‘straddling bus’ always a non-starter? Tell us what you think in the comments below...