"Without investment, transport systems could crash and burn"

Mike Rutherford has had a hellish week's journey, and he knows exactly where to point the blame 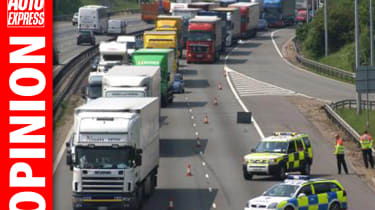 Worst and most expensive travel week I’ve endured anywhere on earth? The one I’ve just been beaten up by in brutal Britain, where the hot and humid roads, rail tracks and airports again proved more Third World than ‘sophisticated developed nation’, which we’re supposed to be – but definitely ain’t.

Many, perhaps most, on-the-move Brits (never mind countless millions of temporary or permanent visitors to the UK) were woefully failed at this time. New Transport Secretary Chris Grayling, where were you? Why weren’t you working overtime? It’s becoming blindingly obvious to me, and probably him, that unless we invest more effort, expertise, money, political goodwill and rationing into our transport infrastructure, the ‘system’ could crash and burn.

• "Louise Ellman is the best ally drivers have in Parliament"

Anyone who tried to drive to the port of Dover, for example, on the weekend of 22-23 July got a taste of autogeddon. I was stuck in those queues of biblical proportions, caused not by beleaguered ferry operators but by everything from increased border control checks and a lorry load of hay burning for hours, to left-hand-drive trucks side-swiping cars with terrifying regularity. And before you ask, no, the police don’t know how often LHD lorries collide with RHD cars, because no credible records are kept. When I saw an impromptu badminton tournament taking place on a closed-to-all-traffic M2 motorway, I despaired.

When, in the same humid week, my £100-plus second-class rail ticket from London to Cheltenham bought a seat in an oven-like carriage that excluded open windows or working air-con, but was inclusive of chronic delays, I wondered how the industry can get away with such ill treatment of customers. Not that Heathrow a few days later was much better. Even though I had a long-haul business-class ticket, this and other mega-airports treat all customers like human baggage. And my plane left late.

The answer, in part at least, to some of the above? Ban HGVs from UK roads at weekends. Dump more freight, not more bruised and battered citizens, on trains. Refund rail ticket prices in full when operators fail to supply the air-con or windows to which summer passengers are surely entitled. Clip the wings of unfit-for-purpose Heathrow and build a new network of smaller, simpler, local airports instead. And a few hundred miles of extra, safer roads for cars and vans wouldn’t go amiss, either.

What do you think is the solution to Britain's transport terrors? Let us know in the comments below...