Arson blamed for a third of all vehicle fires

There are over 18,000 vehicle fires annually, but insurance costs are unaffected 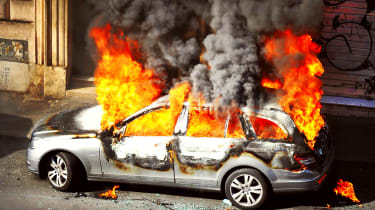 More than a third of the 54,445 vehicle fires in Britain in the last three years were started deliberately, an exclusive investigation by Auto Express has found.

The 51 fire and rescue services attended an average of 18,148 car fires a year, putting out nearly 50 torched vehicles a day with 35.8 per cent deliberately started since 2013.

West Yorkshire had the highest number of deliberate fires, at 1,967 over three years. Nearly two-thirds of all the car fires that West Yorkshire Fire and Rescue Service (WYFRS) attended were ignited on purpose.

• Car UK recalls: check if your car is subject to a recall

Ian Bitcon, area manager for fire safety at WYFRS, explained the majority of deliberate vehicle fires often involve old, stolen or abandoned vehicles. But he added recent years have also seen a new trend develop where “premium cars are torched on their driveway as an attack against the owner”.

Despite over 6,500 vehicles being deliberately torched each year, it doesn’t seem to affect insurance premiums. A new study by insurer Aviva found fires add just £1 to the average insurance policy.

A spokeswoman from the Association of British Insurers told Auto Express: “With payouts for car fires making up a very small proportion of motor claims, it is not an issue which is likely to be exerting much upward pressure on insurance premiums.”

The figures revealed London to be Britain’s vehicle fire hotspot, with the London Fire Brigade (LFB) putting out 4,102 fires in the last three years. Just 20 of the fire services recorded a decline in vehicle fires over the three years, although compared with a decade ago, there has been a massive fall in numbers.

A spokesman for the LFB told Auto Express: “In 2003-4 there were 9,300 vehicle fires in London compared with 1,345 last year.” According to the Home Office, deliberate fires have fallen by 83 per cent in the last 16 years.

Fire services attribute part of this fall to the 2005 EU ‘End of Life Directive’ which instructed car manufacturers to set up agencies to recycle cars for free, resulting in fewer abandoned cars. A Home Office spokeswoman said that although vehicle fires were at a historical low, the Government isn’t “complacent”. She said: “That’s why fire and rescue services continue to undertake fire prevention activities, including interventions designed to reduce the number of fires.”

Blazing up the chart

Below we’ve listed the 10 service regions with the highest number of vehicle fires overall. However, with only two years’ of data, Scotland could easily surpass London’s three-year total.