Microcar madness: we tour the museum of the world's smallest cars 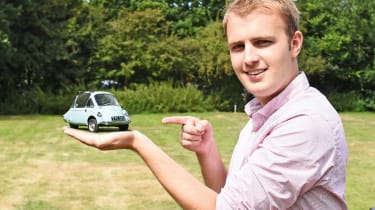 The model that helped save BMW, a car that caused Sir Stirling Moss to start legal proceedings and the vehicle produced by manufacturers of Germany’s famous WW2 fighter plane. They’re three big stories belonging to some of the smallest cars around, but in the world of microcars, size really doesn’t matter.

The dinky runabouts were a common sight on UK roads in the fifties and sixties as the budget list price helped post-war families get mobile. But the public fell out of love with the bubble car in the seventies, largely thanks to the Mini.

Microcars were being discarded and left to rot in sheds and at the bottom of gardens, with only a hardy band of enthusiasts keeping the history alive despite their dwindling appeal. We wanted to find out more about this unique part of the UK’s motoring past, so we hit the road to unearth some of the stories behind these unusual vehicles.

Our search took us to Jean Hammond, who inherited the fascinating Hammond Microcar Collection in the Kent countryside. This features more than 40 unique models dating from 1954 through to a bright yellow 1984 Bamby.

Jean is also the founder of the Register of Unusual Micro Cars, which documents the whereabouts and condition of some of the rarest. Started in 1980 with her husband Edwin’s collection of around 50, it’s now grown to nearly 1,400. 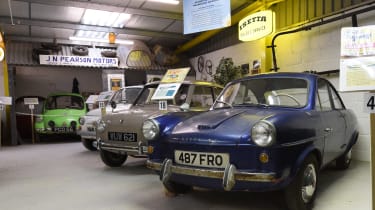 Jean told us: “There was a great eagerness to find the rarest cars. In those days while there were clubs for Bonds, Messerschmitts, Isettas and the like, to support their owners, the rarer cars had nothing because they had been built in such small numbers. So I started the Register for the owners to record the details and history of their cars to be kept on file for its lifetime, notifying the Register when it changed hands. If somebody else turned up with a similar car we could put them in touch with one another.”

Unfortunately, it’s becoming harder than ever to keep track of the whereabouts of vehicles, and many are now marked as “owner unknown”. That’s in part due to the growing value of microcars as collectors have started to take note, especially in the US, where a Peel P50 – the world’s smallest production car – recently sold for £42,000 at auction. When you consider these vehicles could be yours for around £195 new in the sixties – half the price of a full-size model at the time – that auction value is staggering.

It means owners are increasingly reluctant to admit to what they have, even though the Register promises never to divulge any details to a third party. While some of the rarest are housed in the Hammond Collection, there are more in the Bubble Car Museum in Lincolnshire. Jean doesn’t like to think of values, preferring to focus on her passion for the history and the tales behind each rare model. Her love affair with the microcar started when Edwin suggested they restore a 198cc Heinkel 153 together for son Andrew to use as a first car as a way to stop him from buying a motorcycle. 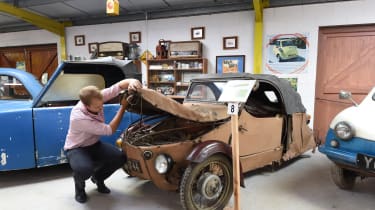 This green Heinkel – known as Kermit – now sits in the collection housed in a replica garage of the mechanic who helped with the restoration near Elephant & Castle, South London. This is just the start of the collection, though, and Jean takes us on a museum tour, stopping at some of the key models.

The oldest is the 1954 Allard Clipper with its 346cc engine driving the left rear wheel and a “boot” that could fit two seats for kids in. It’s one of only three known survivors in the world from a production run of just 20 and widely believed to be the first British car to have a fibreglass body.

Jean explained: “That’s how the collection grew. My husband was fascinated with why they evolved and how the manufacturers got over the difficulties of keeping them as cheap as they could while remaining capable. Innovations were tested out on microcars.”

Jean’s favourite car in the collection is the Opperman Stirling – the only survivor of two prototypes produced by the company in 1958. It was launched for the London Motor Show, and with a 598cc engine was fairly powerful for its time. Despite proving popular on the stand, it never took off as Mini producer BMC leaned on component suppliers to freeze out Hertfordshire-based tractor builder Opperman. The Hammond Collection prototype escaped destruction as it was in Austria being assessed for the Europeanmarket; it eventually appeared in a lock-up in Essex. 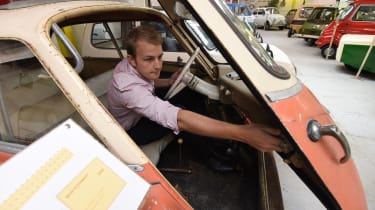 The Opperman Stirling also caused a problem with the racing legend Sir Stirling Moss, who thought his name was being used to promote the car and threatened legal action. In fact, the model was named after Stirling Corner – a roundabout in Borehamwood near Opperman’s HQ.

Jean said: “The Mini definitely killed the microcar off. The Mini came out and it was a real car, with a real engine that would take four people and was reliable. There’s no doubt about it, you have to be dedicated to drive a microcar. You’ve got to know how to make it tick and be prepared to have a toolkit with you.”

Despite the UK’s affinity for the models (there’s still an annual microcar rally organised by owners), it was Germany that led the way in production following WW2. Many of the most popular models were produced by manufacturers that had made planes, tanks or munitions during the war, and were subsequently banned from doing so once European peace had been re-established.

The most famous of these is the Messerschmitt KR200 with its dome-top design that mirrors the cockpit of the fighter plane that tussled with the Spitfire in the Battle of Britain. More than 30,000 were made from 1955 to 1964, with an estimated 600 still around today. 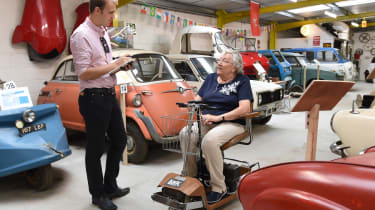 Further German interest comes in the form of the front-loading 582cc BMW 600 – big brother to the better-known Isetta. It was built for just two years between 1957 and 1959, but was BMW’s first post-war four-seat economy car and laid the foundations for the BMW 700 which expanded the firm’s line-up and saved it from financial ruin.

Other big names dabbled in microcars, too, with Italian scooter specialists Vespa and Piaggio producing several van versions that are now prolific on the streets of London as pop-up coffee stops. In the Hammond collection Fiats, Trabants, Suzukis and Daihatsus all sit side-by-side, each with their own unique tale to tell.

Jean told us: “We keep ours as original as we can so enthusiasts can use them as reference points, too. The temptation is to over restore them and put extra brakes and bigger engines in so you can drive them on today’s roads, which they weren’t built for.

“We have the most unusual collection which is owned by the family but is entirely separate from the Register, the quarterly magazine and archives. I have managed to ensure that the Register and magazine are in safe hands, but the archive is the most important thing. I need to preserve this as there’s an awful lot of misinformation out there.”

To achieve this, Jean is currently trying to raise money to form a charitable Trust to house the thousands of paper records safely until they can be digitalised and made available for future generations. She added: “They do not belong to me but to the enthusiast; I just collected them.”

The museum is run purely on donations with a dedicated team of volunteers – Friends of the Hammond Collection – who give up their time to lend a helping hand when they can to maintain the exhibits. There’s a website (www.rumcars.org) where enthusiasts can get together on the forum. And while the collection isn’t open to the public, there’s an annual open day, plus Jean and her family will show groups or associations round via private appointment.

The family runs a camping and caravanning site next door, and the Collection often attracts the attention of visitors pitched up for the night. Jean said: “People stop and stare and ask ‘what’s that?’. We are amazed at how many people want to see the cars and we love to watch their expressions when they come into the museum. Their mouths drop open when they see what it’s all about.”

It just goes to show that, even after all these years, microcars still make a really big impression.

Have you had any experience with microcars? Leave us a comment below!