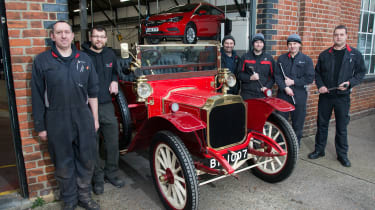 Few businesses have been around since 1909. One or two watchmakers, some auto brands and several banks, maybe, but something as small as a garage? Surely not.

You better believe it. In fact, Western Motor Works in Chislehurst, Greater London, hasn’t only kept its doors open for over a century, it was also the UK’s first purpose-built car garage, and still operates from the same building. It’s now owned and operated by Vauxhall, but remains as busy as ever. To find out more about the iconic garage and its history, Auto Express took a trip down memory lane.

It all started with a red Panhard-Levassor. In 1904, Hugh Marsham-Townshend was given the car by his father. Hugh’s younger brother Ferdinand took a liking to it, and decided there should be a designated garage for other owners to have their cars serviced. “Ferdinand wanted to build one in Knightsbridge, but could find nowhere cheaply enough, so he decided to use his own land, in Chislehurst,” said Joanne Friel, vice chair of the Chislehurst Society. 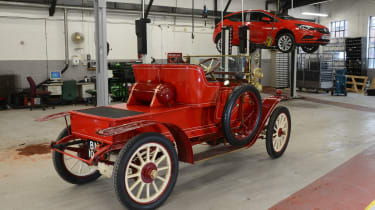 Western Motor Works opened in 1909 as the UK’s first-ever purpose-built garage. However, there were some early issues to iron out. “It’s said that the doors were too small for cars to drive into the workshop,” Joanne told us. “Apparently, the first car that entered had its top taken off.”

With wider and taller doors fitted, the garage was open for business. Inside, there was an inspection pit, lights and sturdy roof beams from which the cars could be lifted. But 1909 models were very different to today’s – so how has the garage kept up with the changing pace of tech?

Martin Dawe, who has worked his way up to foreman over 40 years, said: “When I was an apprentice, there was a car workshop, a section for lorries, a paintshop and a bodyshop. Over time, all the parts have come under one roof.” Few of the machines and practices have survived the test of time, as Martin explained they wouldn’t pass today’s health and safety standards. “We no longer use inspection pits due to fumes and spillage dangers. Instead, we lift cars on a ramp.” 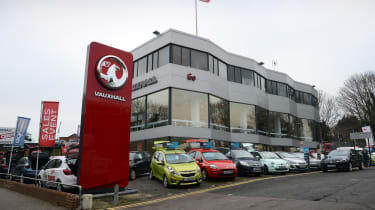 The pits were filled and the roof was raised to make way for ramps and lifts. The only old tool that’s still in use is a hydraulic press. “This was here before I started in 1977. I don’t know when it came here, but it still works,” Martin said. Reading up to 65 tons of pressure, it would have been used when the garage was still working on lorries, as items such as car wheel bearings need far less force to come loose.

The building and machinery have moved on in line with the evolution of vehicles. “While mechanicals are similar to what they were – an engine still works roughly the same as it did 40 years ago – cars are now loaded with tech, electronics and computers. The working environment and practices have had to keep up,” Martin explained. 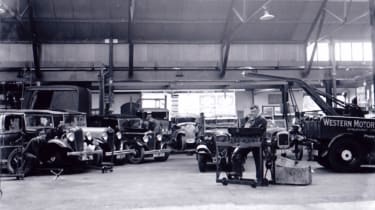 It’s this evolution that makes Western Motor Works worth recognising. Few garages have witnessed the development of cars for more than a century by servicing and fixing them every day. It may look like a modern business, but there’s a lot of history inside these walls. And it sits well with the motoring heritage of Chislehurst, which was also home to former grand prix driver and land-speed record holder Sir Malcolm Campbell. Historian Joanne acknowledged: “It’s a very important site. It’s something we’re proud of.”

So it was only right to once again unite the garage with a car befitting its heritage – an immaculate 1909 Vauxhall B. The car sits on leaf springs, rolls on wooden wheels and has a foot-operated transmission. It looked alien compared with the modern Astra inside the workshop, but parked outside those old brick walls, it fitted the bill surprisingly well.

So what about the future? Martin, his colleagues and Joanne are understandably optimistic. “Not enough people outside Chislehurst know about Western Motor Works. It should definitely have a heritage plaque,” Joanne said. “It’s been here for over 100 years, and I know it’ll be around for a lot longer. It’s part of the community.”

Should Western Motor Works have a heritage plaque? Let us know your thoughts below...