Infiniti has pulled the covers off its QX80 Monograph concept, previewing its large luxury SUV ambitions 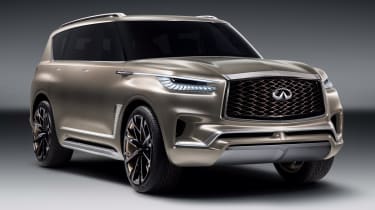 Infiniti has revealed a new QX80 Monograph concept at the New York Motor Show, previewing the brand's intention to create a new flagship Range Rover rival, but it’s unlikely to be offered in the UK.

• The best crossovers and small SUVs on sale

The forthcoming production version of the QX80 Monograph, which means a detailed study into a single area of expertise, will be aimed primarily at markets such as the US and China. 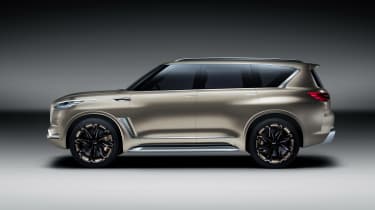 Featuring Infiniti’s latest design language but on a much larger scale and packed into a square SUV form factor, the QX80 features the trademark front grille and the sculpted LED headlamps. It's over five metres long and two metres wide, and rides on massive 24-inch wheels. No technical information regarding a platform or powertrains has been revealed.

“The QX80 Monograph shows our concept of luxury and style on the road, and is an exploration into how we could enhance our future Infiniti offering in the luxury SUV segment,” said Infiniti boss, Roland Krueger. 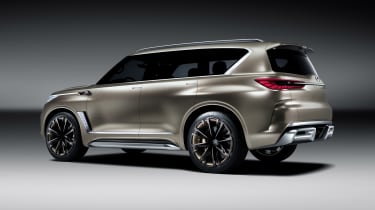 Before the QX80 arrives in production form, we’ll likely see the second generation of Infiniti’s smaller QX50 – a rival for the like of the Audi Q5 and Mercedes GLC.

What do you think of the QX80 Monograph concept? Let us know your thoughts in the comments.