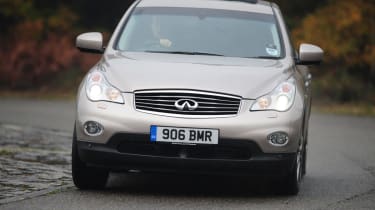 Infiniti is still a largely unknown manufacturer this side of the Atlantic. Those in the US know it as the ‘Japanese BMW’, but Nissan's luxury division faces an uphill struggle if it wants to make any meaningful sales over here. Thankfully the company now offers the QX50 (formerly known as the EX) with a diesel engine, but it still falls short of its European rivals. A BMW X3 is faster, cleaner and more dynamic, so you’d need a whopping great discount to choose the quirky QX50 over a more sensible German alternative.

Infiniti offers two engines in the QX50 If it's performance you require, then the 3.7-litre petrol V6 offers 316bhp and a 0-62mph time of just 6.4 seconds. The diesel isn’t sluggish, though, completing the same sprint in a respectable 7.9 seconds. The QX50 might pull well in a straight line, but the steering lacks feel and dynamically it is still some way behind its European rivals. However, the four-wheel-drive system works well, with its rear wheel bias, and the seven speed auto box shifts seamlessly. As you’d expect, the BMW X3 sets the benchmark for road manners, and the Infiniti falls quite a long way short in virtually every area.

If you’re a cost-conscious motorist, then the Infiniti won’t be the car for you. Even in diesel form, the QX50 is a long way off used by European manufacturers, managing only 33.2mpg on the combined cycle. If you’ve got even a slightly heavy right foot, then you can expect to see that figure tumble into the mid 20s. Emissions aren’t any better either, with the 3.0D model emitting 224g/km CO2, which is disappointing in contrast to the 159g/km that a 3.0-litre diesel BMW X3 puts out. Whichever model you choose, running costs will be considerably higher than similarly priced rivals.

As with all Infinitis, the QX50 does get some edgy styling details. The lines are smooth, and at first glance it looks like a shrunken Porsche Cayenne. However, the closer you look the more awkward it appears - the design is unmistakably Japanese. The tall ride height gives the QX50 some notable presence, but next to an Audi Q5 it just pales into the background. Inside, it looks and feels like an upmarket Nissan. Equipment is good, and the leather covered, curved dash is a nice touch. On the range-topping GT Premium spec you get sat-nav, reverse-parking camera and lane departure warning as standard.

Another failing point of the Infiniti QX50 is when it comes to practicality. It has 340 litres of boot space with the seats up and 1,170 litres with them down, which is well short of the BMW X3's figures of 550 litres and 1,600 litres. Even the smaller BMW X1 offers significantly more in terms of outright luggage space. Up front, the driving position feels cramped, the seat doesn’t lower far enough and there isn’t enough reach or rake in the steering wheel. Taller passengers might struggle in the rear too, as legroom is compromised and headroom suffers due to the sloping roofline.

There are currently only six dealerships in the UK, with another five planned for the near future, which means contact with your dealership – should anything go wrong – could prove a little distant. However, Infiniti prides itself on customer service, and its special VIP service plan will pick up your car, take it to your nearest dealer and drop it back off when it’s done. But considering the strong ties with parent company Nissan, the likelihood of your Infiniti even breaking a sweat between services is next to none – it should prove as reliable as any small Japanese hatchback. In terms of safety kit, the QX50 gets a host of airbags, as well as a number of electronic systems such as automatic lights and wipers and lane departure warning on top spec models. 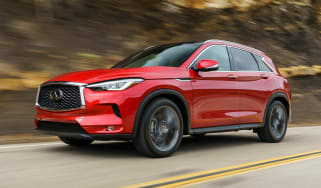 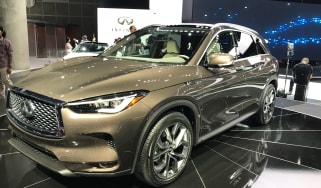 The new QX50 SUV has been unveiled in full at last, with Infiniti taking aim at the BMW X3 and Audi Q5
Visit Infiniti EX37 GT 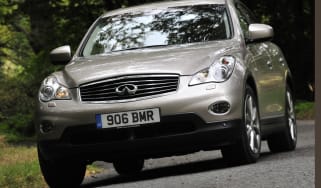 BMW X1 rival has the looks and pace to match, but will UK buyers see the appeal?
Skip to HeaderSkip to Content