BMW X1 rival has the looks and pace to match, but will UK buyers see the appeal? 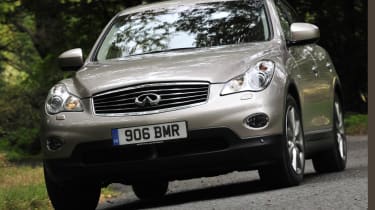 If style and pace are higher on your list of priorities than economy and running costs the EX makes a compelling alternative to traditional coupes and larger SUVs. But with the only engine choice a CO2-spewing V6 and prices starting from £35,200 (£36,500 for our top-spec GT test car), it’s a fairly irrelevant choice for UK buyers. However, a six-cylinder diesel engine will be introduced next year which should help to broaden its appeal.

Small but with big potential, the EX is Infiniti’s offering to the versatile compact crossover segment, and a direct rival for the BMW X1. Nissan’s luxury arm claims the EX is aimed at couples that have outgrown their Audi TT and don’t want a full-blown off-roader or an estate – but does it make any sense other than on paper?

It certainly looks the part. With its coupe-like silhouette and raised stance, you can see why it’s pitched as an alternative to both the Audi Q5 and A5 Sportback. The interior is comfortable and extremely well equipped, but the brown leather in our test car is questionable, while the interior plastics have a long way to go until they’re on a par with the competition from Germany.

The real fireworks are under the bonnet though, where the only engine choice is a detuned version of the Nissan 370Z’s 3.7-litre V6. It’s not the most tuneful unit, sounding coarse on full throttle, but there’s plenty of performance on offer – it will out sprint a Golf GTI from 0-60mph by half a second.

The seven-speed automatic gearbox, also shared with the 370Z, works well too, especially in sport mode where it holds the gears all the way to the red line. But CO2 emissions and fuel consumption leave a lot to be desired, especially when compared to the cheaper, cleaner and almost as fast BMW X1 23d.

Softer suspension settings than its bigger brother the FX help the EX to soak up any imperfections in the road surface, while sharp steering and minimal body roll help it feel closer to a hot hatch to drive than an SUV. But road noise at anything approaching motorway speeds is unacceptable for a car aimed at the luxury market.

Interior space is comparable to a Golf-sized family hatch, but the raised driving position helps it to feel bigger than in its. Nice touches such as rear seats that fold down and back into position electrically prove the EX is a well thought out product, but one that will struggle to make an impact on UK buyers.

Rival: BMW X1 Sitting somewhere between an off-roader and an estate, the X1 brings a genuine premium badge to the small crossover segment. With an all-diesel engine line-up emissions and fuel consumption are class leading, too.