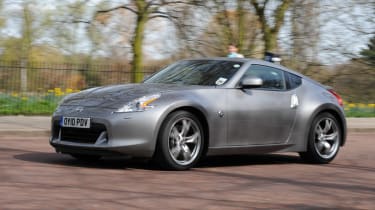 If you're looking for maximum bhp for your buck, then the Nissan 370Z Coupe could be the answer. With a 324bhp 3.7-litre V6 under the bonnet, it outguns rivals like the Porsche Cayman and Audi TT, and undercuts them on price. It delivers lively rear-wheel-drive handling, and its muscular stying will certainly turn heads, but all this doesn't come without compromise. Fuel consumption and insurance costs are high, while refinement is low on the 370Z's agenda.

The standard 307Z received a facelift in 2018, while for buyers that crave that little bit more, Nissan updated the flagship 370Z NISMO in 2015. Power from the 3.7-litre V6 is upped to 339bhp for the NISMO, and an aerodynamic bodykit, 19-inch alloy wheels and a sports exhaust have all been bolted on, too. It demands a £10,000 premium over the standard 370Z but customers appear to think it’s a rather good deal as almost 50 per cent of sales are performance-focused NISMO models.

From behind the wheel the Nissan 370Z is every bit as brawny as its looks suggest. The V6 delivers good acceleration and the manual gearshift and heavy steering require firm inputs to get the desired results. The manual box features Syncro Rev technology which automatically matches engine rpm to the gear on down shifts. An excellent automatic gearbox is also available as an option. Although loud, the V6 engine could sound more tuneful and road and wind noise is intrusive.

The 2018 facelift brought with it a high-performance clutch and updated suspension, but you'd be hard pushed to notice either of these in daily use; the 370Z remains a harsh-riding car around town, while the notchy gearbox and heavy steering mean it requires a fair amount of effort to drive. While it may look fresh after all these years, and its purchase price is attractively low, the 370Z's driving experience is distinctly old-school. Once the high running costs are taken into account, more modern, cheaper-to-run rivals hold greater overall appeal.

Nissan offers the 370Z in three guises: the standard car, the GT model and the 370Z NISMO. Fork out the extra cash for the 370Z NISMO and it doesn't feel like you're driving £10,000 worth of extra sports coupe. The steering is weighty and gearchange crisp but a Porsche Cayman costs only a fraction more and is a far more involving and flattering sports car.

Owning a 324bhp coupe is never going to be cheap, but with a purchase price that's around £17,000 less than the equivalent Porsche Cayman, the 370Z gets off to a good start. Official fuel consumption is 26.6mpg with CO2 emissions of 248g/km for the manual, and a slightly improved 26.9mpg and 245g/km for the auto. In the rear world though you're unlikely to match these figures. Insurance won't be cheap either and there are relatively-short 9,000-mile service intervals. Equipment count is relatively generous, with the standard model getting fully automatic climate control, a Bluetooth telephone connection and Xenon headlamps. You'll have to specify the GT model if you want leather seats, cruise control and Nissan's seven-inch infotainment touchscreen, though.

The 370Z is very much a traditional high-performance two-seater sports car, with a cabin set well back and a long bonnet to house the V6 engine. Bulging bodywork and 19-inch alloys don't hide the fact that this car is designed to go fast, while neat design touches like the boomerang front and rear lights really set it apart. Drop down into the low-slung seats and you'll discover a cabin that's attractive and original, but lacks the depth of quality of an Audi TT or BMW Z4.

Despite having been on sale for almost a decade, the 370Z still looks relatively fresh, and the 2018 facelift brought subtle changes, including new door handles, tinted headlight lenses and a new Infra Red paint option.

For the NISMO variant a bolder bodykit, sports exhaust and tidy red detailing mark it out from the standard model. Recaro sports seats and a suede trimmed steering wheel also feature inside.

While it’s been designed to swallow two golf bags, the 370Z’s shallow boot isn’t that practical and has an awkward shape. Serious wheelarch intrusion means there’s only 235 litres of space in the back. And while there’s some room behind each seat, don’t expect to fit lots of luggage in the Nissan. Cabin stowage is okay, with a decent glovebox, centre cubby and two cup-holders, but the Nissan is a strict two-seater.

Space is tight for the driver, too. The steering wheel only adjusts for height, not reach, which can make finding a good driving position difficult. Rear visibility is limited, although you do get a reversing camera. However, there’s no full-size spare wheel.

The 370Z sells in too few numbers to have featured in our 2018 Driver Power customer satisfaction survey, but Nissan as a brand did well, placing fourth our of 26 manufacturers. Customers rated their Nissans well for the infotainment systems they feature, their exterior design and the safety features they offer.

The brand also has a decent reliability record, and the 370Z’s V6 engine is well proven. Safety kit includes a standard pop-up bonnet, which deploys in the event of an accident to reduce injury to pedestrians. The Nissan also comes with six airbags and active headrests - though it lacks some of the latest safety kit, like autonomous emergency braking. Like other models in Nissan's company’s range, the 370Z has three years or 60,000 miles of manufacturer warranty cover. 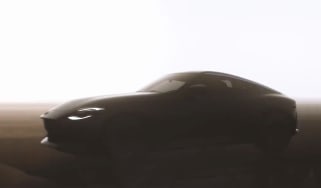 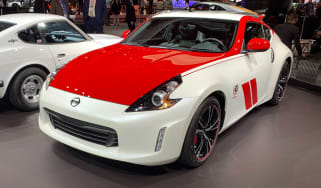 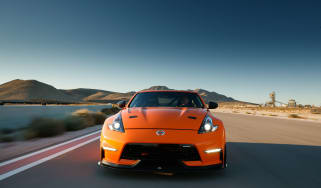 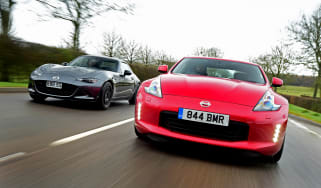 The Nissan 370Z and Mazda MX-5 sports cars focus on fun, and now they fight it out
New Nissan 370Z 2018 facelift review 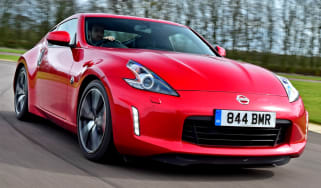 Fast, fierce and hairy of chest, the Nissan 370Z feels like a sports car from another era, and that's the problem
Extreme Nissan 370Zki snow car concept swaps tyres for tracks and skis 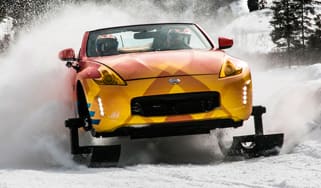 Nissan has unveiled the 370Zki and Armada Snow Patrol concepts ahead of the Chicago Motor Show, both aimed at tackling snowy terrain
Nissan 370Z coupe updated for 2018 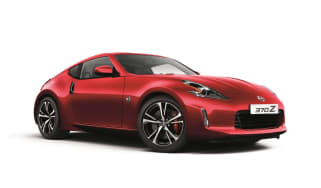 Nissan has refreshed the long-serving 370Z sports car with some visual upgrades and a few mechanical tweaks.
Ford Mustang vs Nissan 370Z 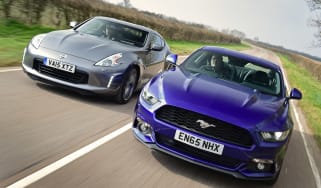 New four-cylinder Ford Mustang promises muscle and efficiency. We find out if it delivers as it meets the Nissan 370Z
Nissan GT-R and 370Z not safe from rise of autonomous drive tech 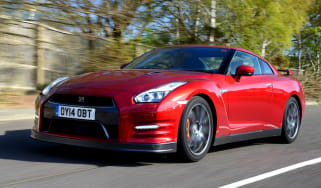 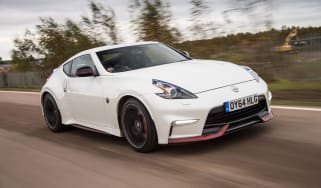 We get behind the wheel of the updated Nissan 370Z NISMO, powered by a 339bhp 3.7-litre V6
New Nissan 370Z Nismo revealed 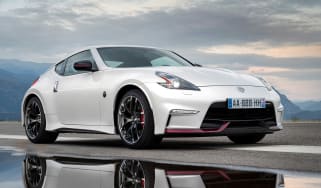 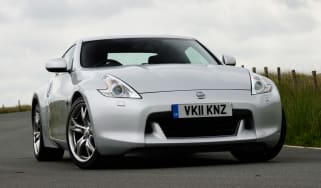 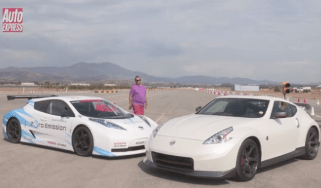 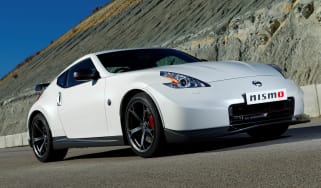 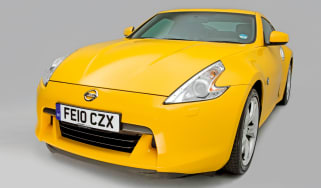 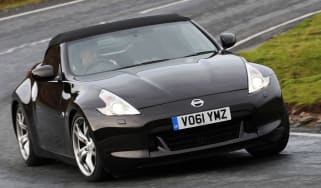 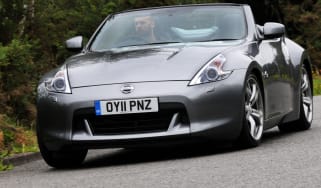 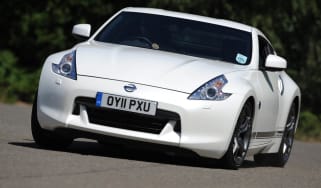 We get to grips with Nissan's special edition muscle car. Have a round of changes made it any better?
Nissan 370Z 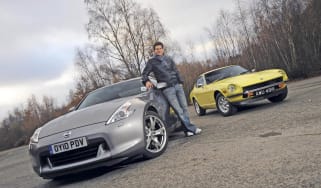 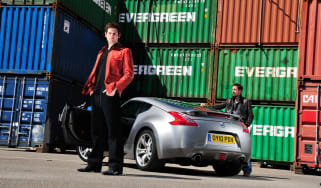 As we pile on the miles in our long-term sports coupé, we ask if it could be today’s answer to the classic Seventies’ TV cop car?
Nissan 370Z vs. rivals 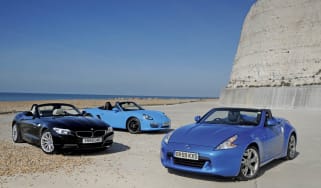 Nissan’s new 370Z roadster has landed! does it have what it takes to turn the tide of sales from Porsche and BMW?
Advertisement
Nissan 370Z 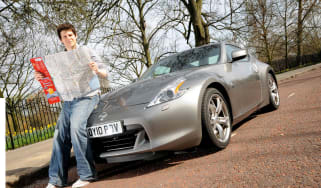 Is the latest Z-car the ultimate long-distance companion? We put it to the test by piling on the miles on a driving holiday...
Nissan 370Z Roadster 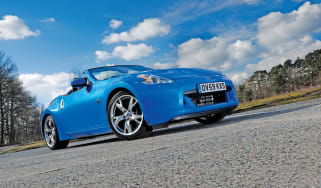