As we pile on the miles in our long-term sports coupé, we ask if it could be today’s answer to the classic Seventies’ TV cop car? 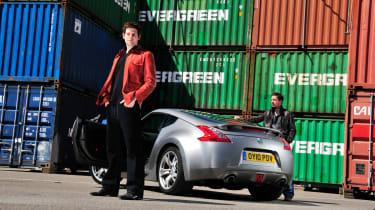 Anyone growing up in the Seventies and Eighties was spoiled for choice when it came to TV police dramas. And one of my favourites was The Professionals. With dodgy outfits and even dodgier hairstyles, it was certainly entertaining, but the cars driven by Lewis Collins and Martin Shaw – alias Bodie and Doyle – had just as much appeal.

Which got me thinking about my 370Z. With its muscular looks, tail-sliding rear-drive chassis and meaty V6, I reckon it would be ideal as the star of a modern-day version of The Professionals. I can just see Bodie and Doyle driving it through a wall of boxes in hot pursuit. In fact, I’ve already done it myself!

Over the past few months, I’ve really got to know the Z. How have we been getting on? Well, while it’s not lacking in retro appeal, it’s got plenty of up-to- the-minute technology. The synchro rev control – which blips the throttle on the downshift – is so good I’ve only switched it off once or twice, just to ensure I have not forgotten how to heel-and-toe.

And that curvy body continues to delight every time I walk up to it in our car park. With wide rear haunches and gorgeous 19-inch alloys wrapped in fat tyres, it ticks all the right muscle car boxes. Combined with the fact that Zs are rare compared to Porsche Boxsters and BMW 3-Series Coupés, it’s remarkably good at turning heads. If only it sounded as good as it looks. In my first report (Issue 1,110), I wrote about how I was hoping the 3.7-litre V6 would loosen up, but 4,500 miles down the road I’m resigned to the fact it won’t. Oddly, a virtually identical unit in the Infiniti G37 Coupé sounds great.

When I took the Z to France in March I was impressed by its distance-covering ability, yet as I’ve done more miles on the UK’s relatively poor roads, the firm ride and tyre roar have started to grate. While I managed to coax 28mpg out of it on a run to Gaydon, Warks, to drive the new Aston Martin DB9 (pictured opposite), I didn’t enjoy the journey on the M40.

Still, the Nissan is great fun on twisty country routes, even if those huge rear tyres offer too much grip! It’s a shame the steering doesn’t adjust for reach – the driving position has never been right as a result – and is short on feel, yet apart from that I am enjoying the Z.

Our car has plenty of equipment, with a fabulous 3D sat-nav system, a comprehensive trip computer and full iPod integration. But perhaps the most appealing thing about the 370Z is its character. As with all the best cop show partners, it’s not without its faults – and, perversely, that makes me love it even more.