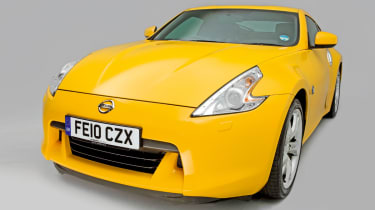 If driving thrills are your priority, this Nissan could be for you; it puts dynamics above all else. As a result, refinement isn’t as good as it should be and it’s not the most practical car out there – especially in Roadster form. Still, the 370Z is a looker – that long bonnet, plus those boomerang front and rear lights, make the car stand out. But fuel and tax bills are high; you could save hundreds of pounds each year by buying one of the 370Z’s rivals, so be sure to look at the whole picture before jumping in.

For years, Nissan has led the way in the world of rear-wheel-drive coupes. Ever since the 240Z of 1969, the brand has shown that it can create great drivers’ cars that are fast and affordable.

The 370Z is its latest offering in this market, and it’s reliable as well as fun – even hard-driven examples tend to be trouble-free if they’re properly maintained.

All this comes at a cost, though. While the 370Z is relatively cheap to buy, it can be expensive to run, thanks to that thirsty 3.7-litre V6.

The 370Z coupe replaced the 350Z in April 2009, with manual or automatic gearboxes. A soft-top 370Z Roadster arrived in March 2010. The motorsport-inspired GT Edition reached showrooms in May 2011, shortly before a revised 370Z appeared, with tweaked suspension, extra kit and improved refinement.

Further revisions in October 2012 brought a reprofiled front bumper, daytime running lights, more colours and optional 19-inch wheels. There were also two limited editions; the Black of spring 2010 and the Yellow of summer 2009.

The 370Z’s toughest adversary is the Porsche Cayman. It has a sky-high image, is great to drive and is beautifully made, plus is practical and looks great – although it costs more. The practical Audi TT comes in coupe or convertible forms, and is available with petrol or diesel power, an automatic box or four-wheel drive – so there’s lots of choice – and the engine options range from mild to wild. Build quality is strong, too, as is the TT coupe’s hatchback practicality. The BMW Z4 coupe-cabrio is also good to drive and very dependable, although it’ll cost you much more to buy than a 370Z.