We drive the revised drop-top – it's the best 370Z yet 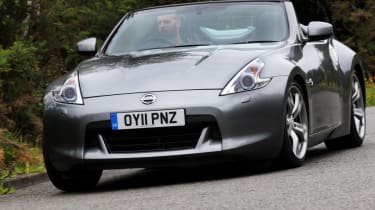 It’s amazing to see how just a few minor changes by Nissan’s European team can make such a big improvement to the Roadster. At more than £35,000, it’s an expensive choice, and despite the raft of standard kit, the car still trails the likes of the BMW Z4 for interior quality and overall desirability. But this automatic version is the most convincing 370Z we’ve driven so far, with better handling and comfort.

The Nissan 370Z hasn't set our pulses racing - even the recently revised GT Edition we drove failed to hit the mark. In a bid to turn the tide of opinion, the Roadster version has been carefully fettled to better suit UK road conditions, as part of an update for 2011. So does the 370Z work better as an open-air cruiser than an uncompromising sports coupe?
It certainly still looks the part. Removing the roof only enhances the standard car’s dramatic proportions, and the styling remains unchanged for this updated model – all the major changes are hidden beneath the angular bodywork.
Engineers at Nissan’s Cranfield Technical Centre in Bedfordshire have tweaked the suspension and damper settings, and added extra sound insulation to the undertray. The changes have made the car much more refined, with a noticeably softer ride and far less tyre roar than before.
The ride is still firm, but jarring intrusions to the cabin happen far less often, which means mid-corner stability has improved as well.
Combine this suppleness with the optional seven-speed automatic gearbox, and the 370Z starts to feel genuinely civilised. The extra ratio means it’s quieter at motorway speeds than the manual version, plus nearly as quick off the line and cleaner and more efficient.
These updates have done nothing to blunt the 3.7-litre V6’s potent performance, though, and acceleration and throttle response are savage.
A flashing red light indicates when to change gear using the long steering wheel-mounted paddles, and there’s a satisfying throttle blip on downshifts.
However, the exhaust note isn’t as throaty and exciting as the head-turning looks suggest it should be, and the Z still isn’t as rewarding to drive as some of its rivals.
Limited rearward visibility with the roof in place means that the new reversing camera is a must, and the shallow 140-litre load bay is suitable only for really small bags.
Share this on TwitterShare this on FacebookEmail