New four-cylinder Ford Mustang promises muscle and efficiency. We find out if it delivers as it meets the Nissan 370Z 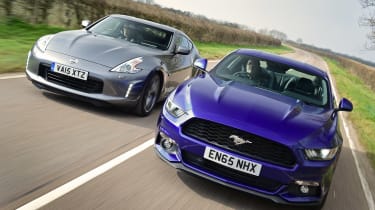 It looks as if Ford is on to a winner with its Mustang. Dealers are struggling to keep pace with demand, and our drives of the UK-spec right-hand-drive model have shown that the bulging order books are entirely justified.

However, the big question still to be answered is whether it makes as much sense with forced induction and half as many cylinders. Purists may feel that fitting a 2.3-litre turbo EcoBoost engine in a car as down-home American as the Mustang is sacrilege, but on the other hand, it delivers nearly as much pace as the V8 and offers greater efficiency.

To see how the EcoBoost model fits in, we’ve lined up a stalwart of the coupe class in the form of the Nissan 370Z. While it has only two seats compared to the Mustang’s four, it’s similarly priced, power comes from a 3.7-litre naturally aspirated V6 and, just like the Ford, promises to deliver rear-wheel-drive thrills. 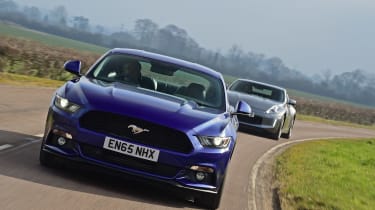 We headed for some great driving roads to find out if the Mustang is still a winner in efficient EcoBoost guise.

At the track, the more powerful Nissan was faster in the sprint from 0-60mph, but the torquier Ford delivers a broader spread of power for overtaking.

In corners, both models feel agile and grippy, although the EcoBoost steals a march with its more composed ride and sharper steering, giving drivers more confidence when pressing on. 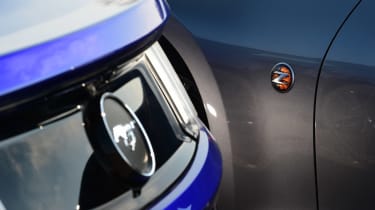 The EcoBoost isn’t the first turbo Mustang to be sold in the UK. Ford shipped the 2.3 Turbo Ghia here as a special import in 1979 and converted it to right-hand drive. Not many were sold, though, as it was slower and more expensive than the Capri. 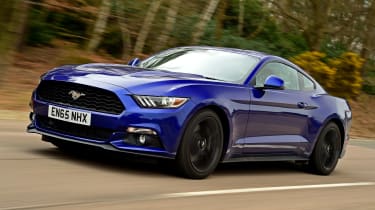 The Mustang wins as it offers decent handling, reasonable running costs and better everyday usability than the 370Z. However, it’s not without its faults. Standard kit is good but quality isn’t up to scratch, and the engine lacks character. If you can afford £4,000 extra, we’d choose the V8 every time; if you can’t stomach its running costs, the EcoBoost is a fast and fun alternative. 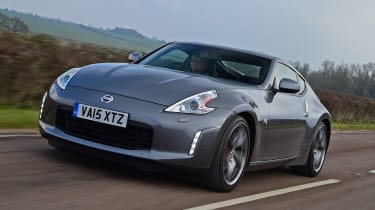 While the 370Z had old-school charm when it was launched, seven years on it just feels dated. The V6 performs well, but it sounds unpleasantly strained and harsh when extended. And although the rear-drive handling is entertaining, the Ford is just as good and far more comfortable when you’re taking it easy. Factor in the higher price and running costs, and the Nissan loses. 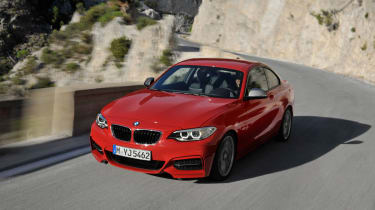 There are few rear-drive coupes at this price, but the BMW 228i closely matches the Mustang. It does 0-62mph in 5.8 seconds and handles well. It has less kit, but cabin quality is well ahead of the Ford’s. 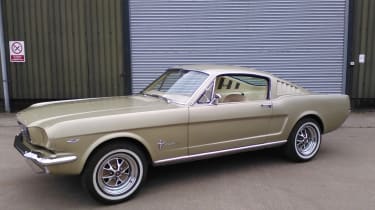 You could have a classic Mustang with the famous 289ci Windsor V8 for a similar price to the EcoBoost. It’ll cost more to run, and finding an unmodified car will be hard, but you’ll likely be able to sell it for as much as you bought it once you’re done.