Four-cylinder Ford Mustang mixes muscle with efficiency - how does it compare with the V8? 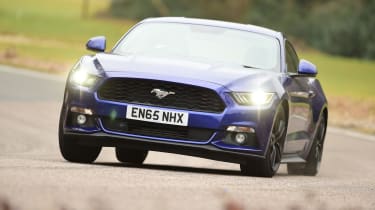 If you park your muscle car preconceptions, then this EcoBoost model is a worthy addition to the Mustang range. It’s nearly as quick as its bigger, V8-powered brother, yet costs far less to run. Better still, it packs just as much visual punch, comes loaded with standard equipment and is surprisingly practical. Only the firm ride and rather dreary engine note let it down. Still, for another £4,000 you can always have the V8...

Think of a Ford Mustang, and no doubt a V8-powered model will come to mind. Ever since the original made its debut more than half a century ago, the legendary muscle car has usually been accompanied by the deep burble of an eight-cylinder engine. There have been versions with four and six-cylinder engines under the bonnet in the past, but they’ve often struggled to make an impact with buyers.

Yet this hasn’t stopped Ford having another crack at downsizing, with this 2.3-litre four-cylinder EcoBoost version, which slots in below the flagship 5.0 GT. So do half the cylinders mean half the fun? To find out, we got behind the wheel of one of the first examples to hit UK roads. 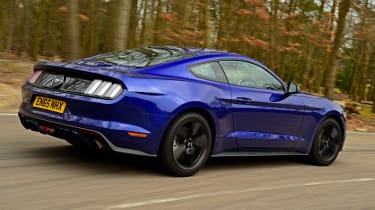 Initial impressions are a little underwhelming, as the engine fires unobtrusively into life before settling into an anonymous idle. Give the throttle a prod and there’s a faint whistle from the turbo, but in all other respects the car sounds no more exciting than a Mondeo.

However, engage first gear and you’ll discover the same precise, mechanical shift action as in the V8-powered model. And with a healthy 313bhp and a muscular 432Nm of torque, the 2.3 EcoBoost isn’t short of firepower; Ford claims the Mustang needs a mere 5.8 seconds to cover the sprint from 0-62mph and motors on to a 145mph top speed. 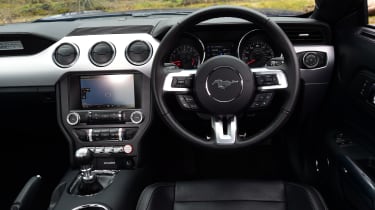 In reality, the 1,655kg Ford seems a little sluggish off the line, but once the turbo starts pumping at around 2,000rpm it accelerates smoothly and strongly, and feels nearly as quick as the more powerful V8. In an effort to make the car sound more exciting, an artificially generated growl is played through the speakers. Yet while this isn’t unpleasant, it doesn’t sound natural.

As with the 5.0-litre GT, you can choose between Normal, Wet/Snow, Sport+ and Track modes, with the latter two sharpening the throttle and adding weight to the steering.

• Ford RS: a history of the fastest fords

Our car wore winter tyres, so it lacked outright grip, but the steering was quick and well weighted while the rear-drive handling balance added an extra layer of engagement. Body control was good, too, although the trade-off for this composure was a surprisingly stiff ride. 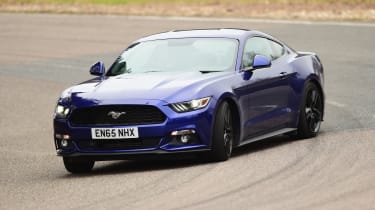 In all other respects, the EcoBoost is identical to the 5.0 GT. Apart from smaller 18-inch alloys it looks the same on the outside, while the roomy cabin is packed with the same retro touches and array of standard kit. Unfortunately, it also shares the same cheap plastics and garish chrome trim.

Where the EcoBoost differs is in its running costs. Claimed economy is a reasonable 35.3mpg – the V8 promises a mere 20.9mpg – and CO2 emissions stand at 179g/km.