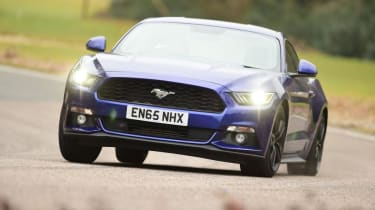 Now the initial rush to own a Mustang has calmed down, values have started to settle and the number of used cars coming onto the market is creeping up. It remains in a class of its own, because it’s one of the more charismatic and distinctive cars available at any price. It’s very alluring, with lots of power, a brilliant soundtrack (in V8 form at least) and decent kit. Compared with most rival four-seater convertibles and coupés, the Ford isn’t that sophisticated and the cabin doesn’t generally feel as well made, but this is a car that you can buy with your head as well as your heart.

When the original Ford Mustang went on sale in 1964, it became the fastest-selling car in history. But, despite its success, the Mustang didn’t come to the UK; it would be another half a century before we could buy an official import in right-hand drive.

By this point, Ford was on its Mk6 Mustang and, when the announcement was made that UK enthusiasts could finally buy a right-hand-drive version, waiting lists quickly grew.

With the earliest UK-spec cars now three-years old, there’s a decent supply of second-hand examples coming onto the market; but does the model live up to 50 years of expectation and hype? 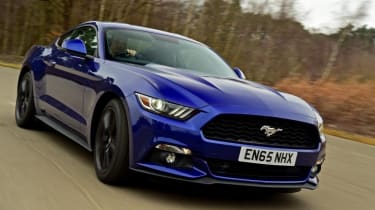 The Mustang Mk6 went on sale in the UK in January 2015, priced from £29,995. Ford offered it in 312bhp 2.3-litre four-cylinder EcoBoost or 410bhp 5.0 V8 GT forms, with six-speed manual or auto gearboxes, and in (Fastback) coupé or convertible body styles; buyers could pick any combination they wanted.

There was one trim level, plus a £1,795 Custom Pack that added upgraded hi-fi with nav, climate-controlled front seats and rear parking sensors. An updated Mustang reached showrooms in May 2018. The V8’s power was hiked to 443bhp, the auto box fitted with 10 gears, all exterior lighting was by LED and fresh colours became available.

There are no bad options in terms of body style, engine or transmission; each of these decisions will be personal depending on your tastes and needs.

While the V8 sounds great, the 2.3-litre EcoBoost offers impressive performance with decent economy; if you’re buying for regular use, the EcoBoost’s running costs will be more palatable. 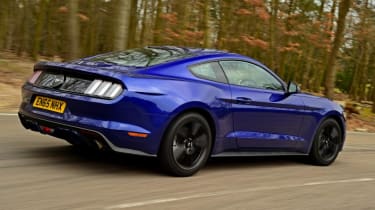 The only options are the four items that make up the Custom Pack, along with a range of special (mainly metallic) paint finishes, stripes, and a contrasting roof colour to top it all off.

Alternatives to the Ford Mustang Mk6

Nothing quite compares with the Mustang, thanks to its V8 power and accessible price. However, for the same sort of money you could have a fairly low-spec coupé or convertible Audi A5, BMW 4 Series or Mercedes C-Class, all of which are four-seaters, but feel very ordinary in comparison to the Ford, accomplished though they are.

The Porsche Boxster and BMW Z4 are strictly two-seaters, fun to drive and well made, but offer no V8 option.

All of these German rivals feature higher-quality cabins, but none has the presence or offers the same value; you’ll get a lot more for your money buying the Ford, despite its current strong residuals.

The split between manual and automatic transmissions is even; both are nice to use.

Make sure that the air conditioning works as it should, because compressors and condensers can fail.

Some early models had an oil cooler fault that contaminated the engine’s cooling system. 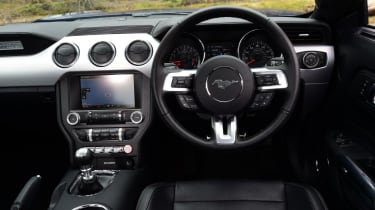 The Mustang’s retro-styled cabin is well stocked, but its quality simply can’t match that of German rivals; facelifted cars are unquestionably superior in this respect. Although it’s billed as a four-seater, in reality the Mustang is a 2+2; boot space is par for the course at 408 litres in the Fastback (which has a boot lid rather than a hatch) and 332 litres in the convertible. 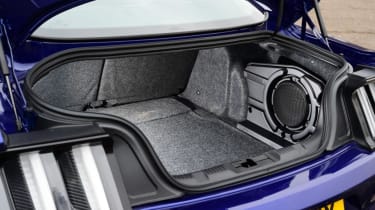 There has been just the one recall for the Mk6 Mustang so far: for the high-current wiring loom connected to the battery. This was routed near the exhaust manifold, and could sometimes become heat-damaged.

If the insulation was affected enough to cause a short circuit, a fire could break out in the engine bay. The fix is to secure the loom away from the exhaust manifold.

The Mustang may be a best seller within its class, but it’s not mainstream enough to get into our Driver Power surveys. The owner reviews on the carbuyer.co.uk website are generally very positive: lots of performance, great comfort, excellent value, but the earliest Mustangs had teething problems that later cars don’t.