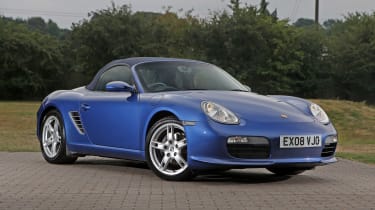 Driving enthusiasts have never had it so good, because there are so many talented cars available for so little money. If anything, we’re so spoiled for choice that the biggest challenge can be homing in on the right model. However, if you’re in the market for a premium sports car that’s sublime to drive, beautifully built and searingly fast, the answer is simple – a Boxster ticks each of these boxes and several more besides. This Porsche is so good that it can be hard to see the point of the 911. Token rear seats is one obvious answer – but if you don’t need those, the strictly two-seater Boxster should be everything you could ever need from a sports car.

When Porsche unveiled the original Boxster back in 1996, the roadster went straight to the top of the class. It was much more fun to drive than its obvious rivals, and it could also take on far more costly sports cars and win. This was a true giant killer.

While the styling of those earliest cars polarised opinions, the second-generation model that arrived just under a decade later looked much more coherent and was even better to drive. Now the third generation has been replaced by the 718 Boxster, values of the Mk2 are at a level where you can buy one as a second car for some fun – or even as a first car, because the Boxster is much more usable than you might think. 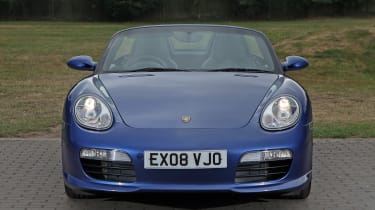 A facelift in January 2009 brought improved steering, more standard kit and the option of Porsche’s sublime PDK dual-clutch gearbox. There was also a 2.9-litre engine for the Boxster, while the S was boosted to 310bhp. The Boxster Spyder was introduced in February 2010. With 320bhp and less weight, at 1,275kg, this is the most involving Boxster of all to drive. The third-generation model (codenamed 981) reached UK showrooms in May 2012.

All Boxsters got a six-speed manual gearbox as standard, apart from some early 2.7s that featured a five-ratio box. While the manual transmission boasts a positive action and a slick change, the Tiptronic auto blunts the performance – which is why a manual 3.2 S is the one to go for unless you can stretch to a later PDK-equipped 3.4-litre car. 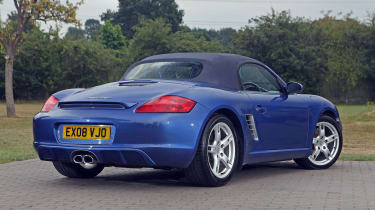 Post-January 2009 models are best of all, because they got new engines based on the 911’s design. With direct injection, these powerplants were far more efficient than before, so fuel bills should be lower. All Boxsters are well equipped, but consider what options are fitted; xenon lights, a wind deflector and heated sports seats are all desirable.

Alternatives to the Porsche Boxster Mk2

On paper the Boxster has an array of rivals, but in reality nothing can match its blend of quality, dynamic engagement and practicality. The Audi TTS and TT-RS roadsters offer four-wheel-drive security and excellent build quality, but they’re rather inert to drive in comparison – although the 335bhp RS is especially quick.

The BMW Z4 and Mercedes SLK provide year-round coupe-cabrio usability, and their quality is superb, but neither can match the top-down practicality of the Porsche, with its two boots – although the SLK does offer diesel efficiency if that appeals. Alternatively you could look to Japan, to the Nissan 370Z or Honda S2000. Both are fast, reliable and great fun to drive, although neither comes close to the Boxster’s levels of build quality.

The top mechanism can suffer from failed ball joints, while poor repairs can damage the roof – so check that no water has leaked into the cabin. 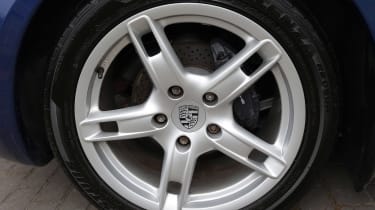 Stick with 17-inch wheels for general road use; larger rims spoil the ride too much. Whatever versions are fitted, kerbing is common – so check for damage.

It’s well worth buying a Boxster with sports seats; the standard items are excellent, but the sports option takes comfort to a whole new level.

Pre-facelift cars (those that were built before the end of 2008) can suffer from stonechipped paint all too easily, so do look out for evidence of damage.

The cabin is sober yet looks timelessly classy, with premium-quality materials. The seats are superb, but tall drivers may struggle to get comfortable on long journeys. And while the hood works brilliantly, the optional wind deflector makes fast top-down drives better. 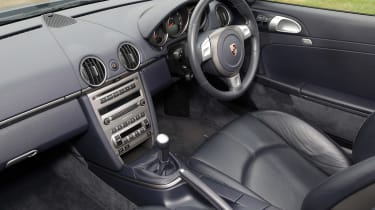 The flat-six is chain-driven so there’s no cambelt, while the long-life coolant doesn’t need replacing. The air-con is checked every service; if it needs recharging, expect to pay £100. These are all official Porsche prices; there are no discount schemes for older cars, but independent specialists can normally reduce bills significantly.

The Mk2 Boxster has been recalled just twice. Cars built in November and December 2005 were called back in January 2006 due to parking brake issues. A lever in the parking brake mechanism failed; it simply needed replacing.

The second recall, in April 2010, affected a mere 82 Boxsters because it covered only Spyders built up to that point. The problem was with the visor, which could unlatch at speed. Dealers fitted a new catch to keep it in place.

The 987 Boxster last appeared in our Driver Power satisfaction survey in 2015, in 141st – not bad for a decade-old car. First place for handling, sixth for performance and 17th for build were great; 168th for reliability and 182nd for running costs weren’t.