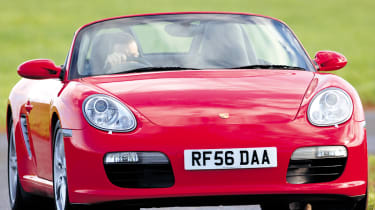 Driving No matter what road you're on, you never forget you're driving a sports car when behind the wheel of a Boxster. The taut frame, stiff gearbox and weighty steering mean that, although the Porsche is harder work at low speeds, as you go faster, the perfectly refined controls become more rewarding. The beautifully balanced chassis lets you know exactly what's going on via the steering and seat of your pants. If you love driving, you'll love the Boxster. Flat-six 'boxer' engines mounted behind the rear seats are special too. Both 2.7-litre and 3.2-litre howl into life and emit a muffled wail as speeds pick up. The standard engine may have over-long gear ratios (a five-speed gearbox is standard; the optional six-speed is snappier) which, coupled with modest torque, means it doesn't have great reserves of get up and go - but against the clock, it proves every bit as fast as rivals. The brakes are exceptional too, and despite its agility, the Boxster also cruises easily, with little wind noise.

Marketplace The Boxster has been charming drivers since it first hit the UK in 1997. But while packaging, build quality and powerplants are all areas the German marque excels in, what about styling? To our eyes, the gradual evolutionary updates to the shape haven't gone far enough - the last major update merely added large grey intakes on the flanks and rounder headlights. However, for many, the simple fact the Boxster wears a Porsche badge will be reason enough to buy one. Equally aspirational rivals include the BMW Z4, Lotus Elise and Mercedes SLK, though the Alfa Spider and Nissan 350Z are offered for those who don't want to spend quite as much.

Owning The Porsche's cabin lacks any real design flair. There's nothing wrong with the quality or layout, and stowage is reasonable. But even though you sit very low, the Porsche doesn't generate the sense of occasion you'd expect. Options are extremely expensive too, and as leather and climate are extra, the average customer has to spend thousands to achieve a decent spec level. Not even a wind deflector is standard. The roof retains a stiff centre release latch too, though once undone, the electric motors take over to drop the roof elegantly under a partial cover, in just 12 seconds. It's quicker still to close. The Boxster is well-packaged too; all the weight is concentrated within the relatively short wheelbase, meaning either end of the car is freed up for storage - 280 litres isn't to be sniffed at. The lightweight Porsche is also very economical for a sports car, and residuals will always be strong. It isn't cheap to service though; at least they're 20,000 miles apart.