The Bullitt Mustang takes Ford's standard V8 muscle car package to another level but is it worth the price premium?

More than just a pretty face, the Ford Mustang Bullitt is a proper, if slightly old-school V8 sports car. Its engine breathes more freely and therefore sounds better than ever. It looks brilliant, and is even pretty good to drive – in a traditional, chest thumping kind of way. The £5,000 premium quite a bit to ask, however.

On the surface, the Ford Mustang Bullitt doesn’t appear to offer a whole lot extra above and beyond what you get from a standard V8 GT.

Apart from its charismatic dark green paint, a few bits of chrome and some natty new 19-inch Tor-Thrust wheels, it would appear to be much the same car as the regular Mustang. Not that there’s an awful lot wrong with that.

• Best muscle cars of all time

Look more closely, however, and there are aspects that differentiate it, the most obvious of which – apart from the paint job – is its new induction system. Internally, the 5.0-litre V8 remains in standard tune, but been allowed to breathe much more freely thanks to a huge new air filter, bigger throttle bodies and an all-new exhaust. 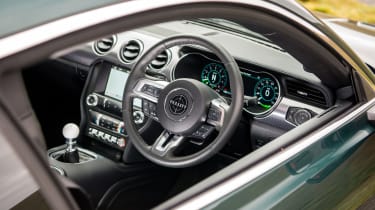 The result is a 14bhp hike in power (to 453bhp) plus a fulsome 529Nm of torque. But, the Bullitt’s V8 engine feels and sounds very different indeed. This almost makes the Bullitt worth the extra outlay on its own.

The upgrades don’t stop there. As well as extensive Bullitt badging on the steering wheel, sills and bootlid, you also get Ford’s new SYNC infotainment system, alongside Apple CarPlay and a B&O sound system. You also get a pair of Recaro seats and a white cue ball gear lever for the six speed manual transmission.

Ford has also uprated the brakes to big Brembos, while the gearbox features a new auto blip on downshifts. This works a treat, even if it means you no longer need to master the art of heel and toe because the electronics take care of that for you.

On the move, the Bullitt feels predictably meaty in its personality, with a fair bit of inertia to keep in check if and when you start to drive it quickly. But it is aided here by Ford’s optional new MagneRide system, which improves the body control while offering a ride that is decidedly more soothing than normal. This set-up is worth the £1,600 extra.

But the best bit about the Bullitt on the move is what it sounds like, especially when you reach the final 2,000rpm. On paper the improvement in acceleration is negligible, but subjectively it feels a lot sharper than the regular V8 – producing a monster sound to go with it.

The steering is good, too, albeit in a traditional, slightly old-school kind of way. It’s the sort of car that needs to be worked to be rewarding, but get it right and it’s very entertaining.