The 2.3-litre EcoBoost version of the Ford Mustang still lacks the drama of the V8, but updates for 2018 are an improvement 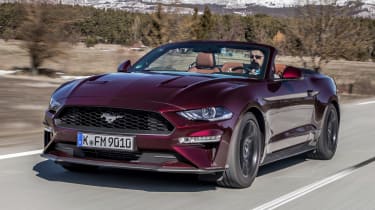 Despite a drop in power, the updated Ford Mustang EcoBoost is much improved over its predecessor, primarily because of the new 10-speed auto gearbox and the optional adaptive dampers. It still doesn’t get close to delivering the drama or the performance of the V8, but it’s closer than it’s ever been.

As Mustangs go, a four-cylinder turbocharged automatic Convertible couldn’t be further from the American dream if it was made in North Korea in a factory staffed by Russians. But bear with us, because Ford has been busy working on the facelift of its sixth-generation Mustang.

We first drove the revised V8 GT last year, but we’ve had to wait until now to try one of the European-spec cars due in UK dealers in the coming months. Along with a light nip and tuck at the front and rear, Ford has added new digital dials and a 10-speed automatic gearbox.

Curiously, the four-cylinder 2.3-litre EcoBoost’s power output has dropped in order to reduce emissions and improve economy. But despite peak power dropping from 313bhp to 286bhp, it’ll sprint from 0-62mph one-tenth quicker (5.7 seconds) and hit 145mph flat out. 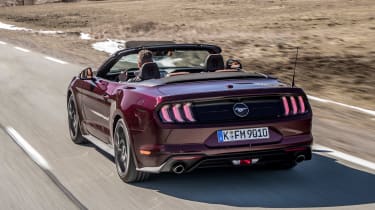 Of bigger significance is that new 10-speed automatic gearbox. Having sampled it in the V8 previously, we concluded that while it’s an improvement over the six-speed auto it replaces, it still doesn’t offer the immediacy and performance advantages of the best double-clutch units favoured by the likes of Porsche, BMW and the VW Group. Could its true calling be in a cabrio with half the cylinders?

It’s the sound that hits you first. Or rather the lack of any noise ruffling your ear hair. There’s a gentle rasp from the EcoBoost engine on start up, but for a car with the bonnet acreage of a Mustang, the mute soundtrack doesn’t make the strongest first impression. Switch between the driving modes – Normal, Sport, Track and Snow/Wet are now joined by Drag mode and My Mode, the latter allowing you to configure engine, exhaust sound and, if fitted, the optional adaptive dampers – and the tone doesn’t improve greatly, either.

Noise aside, the new drivetrain is a marked improvement over its predecessor. The ratios in the 10-speed unit are tightly stacked and remarkably close (the EcoBoost and V8 share the same set-up) and once you get your head around being in seventh gear at less than 40mph, it’s as effortless as you want it to be. Crucially, when you up the pace, there are few objections from the powertrain.

Upshifts are quick enough when left in D, but knock the selector back to Sport or use the paddles on the steering wheel, and you can neatly match your upshifts to the engine’s output. This is useful, because the four-cylinder becomes breathless once you reach its 5,400rpm peak, and there’s little to be had from chasing the redline some 600rpm later.

Downsides? Well, while the downshifts aren’t too slow, the time-lapse between you pulling the left hand paddle and a lower gear being selected is too long if you want to make the most of the Mustang’s performance. 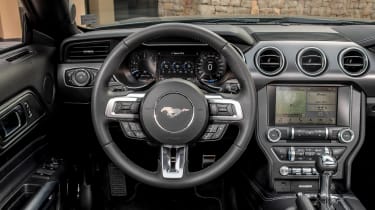 Of greater significance, is the transformation the optional MagnaRide adaptive dampers make to the car’s chassis – especially in the Convertible car. Previously, a drop-top Mustang would pitch into a corner and wait for the body to catch up, before wobbling through the exit. Now, though, there’s poise and body control, but it doesn’t come at the expense of the Mustang’s more gentile approach to ride quality.

The set-up adds a level of precision and composure that was previously lacking, too; roof up or down, a MagnaRide-equipped Mustang Convertible closes the dynamic gap on its Coupe equivalent. Ford charges £1,600 for the dampers, and they’re worth every penny.

Elsewhere, the new 12-inch TFT instrument cluster is clearer to read and offers more functionality than before. There’s additional safety kit including pre-collision assist with pedestrian detection and adaptive cruise control. The seats are still a little too gentleman’s club for our liking and the roof-down buffeting can be tiresome, but overall it’s a marked improvement on its predecessor.