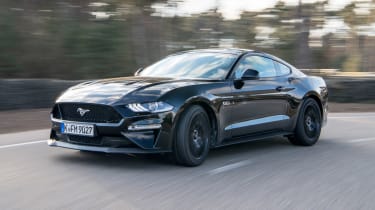 Ford’s bolstered the Mustang’s character with a more accomplished automatic gearbox that makes it – in isolation – both a sweeter cruiser and a better performer. However, it’s still got some way to go to match the best auto boxes on sale, which means the more immersive six-speed manual is still the one to go for with this facelifted model.

We’ve briefly sampled Ford’s new 10-speed automatic Mustang in the US already, but alongside a look at the firm’s new Fiesta ST, we’ve also now learnt the tech secrets that underpin the development of its new transmission.

This new gearbox has been developed in conjunction with Ford’s big rival, General Motors, and Ford is hoping that it’ll address criticism levelled at the old car’s sluggish six-speed auto (although it’s used in many more models than just the Mustang).

On paper, it’s an advanced piece of engineering with some innovations that give the Mustang much improved performance. First of which is what the Blue Oval’s automatic transmission specialist Ian Oldknow calls direct-acting electric solenoids. 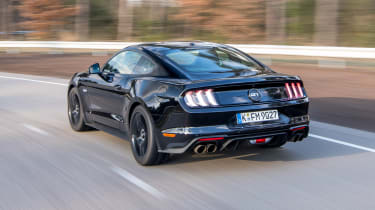 These give greater control over the clutches on the 10-speed unit’s planetary gear sets, which put simply means the box can swap ratios faster but also more smoothly.

It’s allowed Ford to develop a direct downshifting function that means the auto box can behave like a dual-clutch in some respects – it doesn’t have to kick down through all the gears if you ask for a burst of acceleration, for example, so could in theory change straight from 10th to fourth for maximum performance as fast as possible.

This also works going up the gears, with the transmission able to ‘skip shift’ directly from, say, third to sixth.

Is 10 ratios too many? Ford doesn’t believe so, with Oldknow stating that smaller steps between gears means smoother and faster changes, while it also optimises performance. This is particularly the case for naturally aspirated engines such as the 5.0-litre V8 we tested, upped to 444bhp in this facelifted model, as it keeps the engine closer to optimum performance. 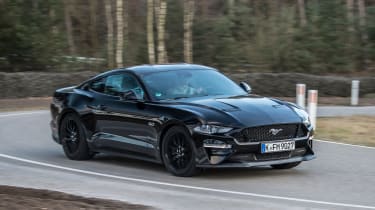 The motor’s extra power has been liberated by high-pressure direct port injection alongside low-pressure port injection and it feels big lunged. As rivals turn to turbos, this naturally aspirated unit is lovely, delivering a deep bellow that morphs into a bark higher up with even more revs available thanks to a limiter set even higher here.

Other developments include something called an integrated turbine clutch, which uses the housing as part of the clutch pack to save 1kg in weight and improve packaging, in turn giving more space for dampers in the transmission to improve refinement.

So how does it drive? Unfortunately, it doesn’t shift with the same speed or precision as the best in the business.

There are six different driving modes, ranging from Snow/Wet, Normal, Sport, Track, Manual and Drag Strip. This latter setting has been enabled by the developments inside the box and has been set up to provide maximum acceleration.

During gear changes the engine’s torque is maintained, which does mean there’s a trade-off in refinement for this most aggressive mode. We’re told reliability won’t be sacrificed, especially given how infrequently owners will likely use this feature.

The shifts are quick but a little lurchy, so Sport or Track is a better option, as the smoothing out of the changes means the Mustang’s rear axle is upset less as it goes up through the gears.

With 10 speeds to choose from there’s no doubting the transmission keeps the V8 closer to its sweet spot, it’s just that upshifts could be snappier still and down shifts served up quicker after you pull the left paddle – although they’re still delivered with a delicious flare of revs and a muscle car chorus amplified through the new Active Valve Performance Exhaust on our test car. 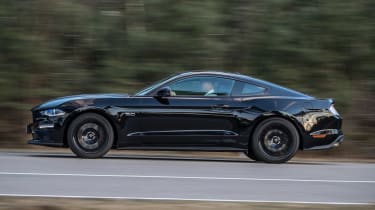 You can tell if this is engaged or not through the new 12-inch digital dash display, which alongside some exterior styling tweaks is another new feature for this facelifted car. Pre-collision assist with pedestrian detection and some other safety tech such as adaptive cruise that “will contribute towards an improved Euro NCAP safety rating,” according to Ford is also new.

Back to the gearbox. Left to its own devices it’s a consummate cruiser, kicking down directly to the right gear when you squeeze the throttle and changing up smoothly when you back off.

This is a performance car however, so it has to deliver just that. While it’s undoubtedly an improvement, it’s still got some way to go to beat even the best regular automatics for ability (think BMW 440i) let alone dual-clutches like the PDK in Porsche’s 718 Cayman, even if it is smooth and easy in normal conditions.

Our brief drive at Ford’s Lommel test facility was limited to tracks to mainly test the new transmission, so we can’t tell just how different (or not) this facelifted car is dynamically to its predecessor. We’ll know more on this front in a few weeks, but it certainly hasn’t lost its personality that’s served up with the V8 engine in GT form.