With more and more performance cars downsizing their engines, how does the 6-cylinder BMW 440i stack up against its rivals? 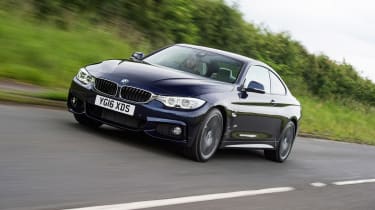 The BMW 440i features a smooth, powerful straight-six engine and is great fun to drive while also being a comfortable cruiser. It's not the best choice for economy though, especially with an engine so eager for revs. A 435d might make more sense if that's a concern, but the 440i is still a great choice for those sick of downsized turbocharged four-cylinder engines, albeit a pricey one.

Last year, BMW replaced its top-spec 335i petrol 3 Series with a more powerful 340i. Now it’s the turn of the 4 Series, with this 440i getting an extra 20bhp from its turbocharged six-cylinder petrol.

With 450Nm of torque, our automatic model (it's also available with a six-speed manual) will go from 0-62mph in five seconds flat and on to an electronically limited top speed of 155mph. It's not all about the numbers with this car, though, as the straight-six delivers its power in a rather addictive way. 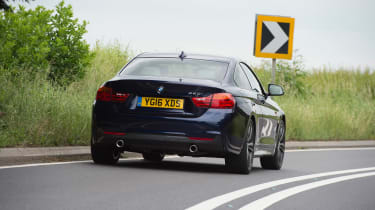 Despite being turbocharged, it loves to be revved. Overtaking in-gear is easy, but the real joy comes when you stretch it out. It sounds fantastic, and there's not so much power that you're going too quickly before you get to enjoy it. It strikes a great balance between performance and useability on the road.

Economy of 42.8mpg in the auto model isn't too bad, but for those looking for a more frugal alternative, BMW will still sell you a 435d diesel. It offers near identical performance at a similar price, but with economy of 50.4mpg. For some the smooth petrol in the 440i will outweigh the higher fuel costs, though. 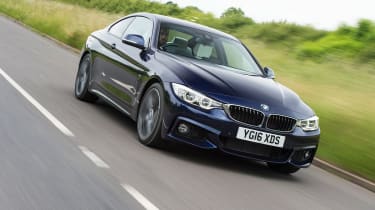 The excellent performance goes hand in hand with the 4 Series' great handling, too. The steering is a bit light in Comfort mode, but put it in Sport and it weights up nicely, giving you confidence through tight bends. There's a little body roll, but the car settles during the corner and feels well balanced.

The ride is well judged too, offering plenty of support on a rough roads without feeling harsh or uncomfortable. It's not as smooth as a Lexus RC, but the BMW is still a comfortable car for cruising. 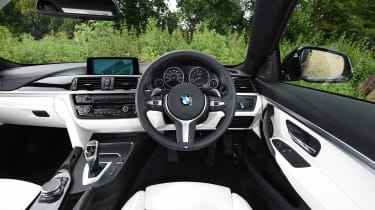 Similarly, the 4 Series has a classy and well designed interior, but it's not as sophisticated a Mercedes C-Class Coupe. The dials are a highlight, and the large display screen on top of the dash looks good too. The front seats are comfortable, but hop in the back and the lack of head and legroom will be a problem for adults.

There's a 445-litre boot, which is bigger than its Mercedes rival. The rear seats fold down easily with some switches under the hatch, too. There's also a 12V power supply in the load bay, plus netting to hold down loose items.