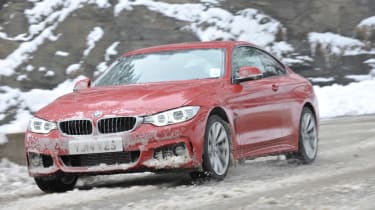 Putting a powerful diesel engine and four-wheel drive into a coupe isn’t the most obvious choice, yet the result is pretty compelling. The BMW 435d isn’t the sharpest car to drive, but as a stylish cruiser with lots of reassuring grip, it has lots of appeal. In fact, it’s probably a better everyday choice than the forthcoming M4 if you’re after pace rather than handling thrills.

Slotting a diesel engine into a coupe isn’t the most conventional choice, but this isn’t any old diesel. The 3.0-litre straight six in this BMW 435d produces 309bhp and 630Nm of torque – so much grunt, in fact, that it’s only available with xDrive four-wheel drive.

The BMW 4 Series isn’t tuned to be the sharpest drive – it’s more a well honed cruiser that won’t disappoint on a decent, winding road. But things are turned up a notch with the 435d flagship. The engine delivers a real turn of pace with just a flex of your foot. It sounds pretty sporty for a diesel, too, and a bit less industrial than the 330d, despite essentially being the same engine.

The standard eight-speed auto box responds well, giving smooth shifts in Comfort mode, yet responding quickly to the wheel-mounted paddles when you feel like taking manual control. The four-wheel-drive system is the third pillar in this impressive powertrain, making the 435d surefooted in bends, but with so much grip you can really throw it around. It’s also good to know this car offers rock-steady grip if the weather is nasty.

The steering is lighter than in the 3 Series and doesn’t build much weight as you add lock, but it gives a direct, responsive feel to the way the 435d drives, and makes it seem more agile.

If you want the 435d to offer storming performance or handling thrills, you might be disappointed and better off waiting a few months – and spending £11,000 more – on a new M4.

But in the real world, it has more than enough pace to occasionally entertain a keen driver while being confidence inspiring, stylish and practical – making it a better all-round choice.

It will cost you an extra £3,000 to upgrade from SE to M Sport spec, but it brings 18-inch wheels, M Sport bodywork, sports seats and metallic paint.