We take our first UK drive in the Mercedes C-Class Coupe, putting the 250d diesel version through its paces 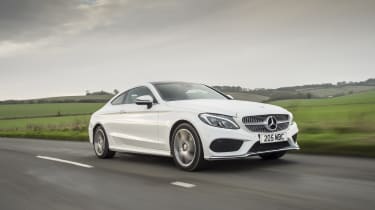 The new C-Class is for posing rather than performance, but if you’re in the market for a stylish two-door coupe, then it’s well worth a look. The Mercedes is fast yet frugal and has one of the best interiors this side of a Bentley Continental. Everything feels well built, and some of the optional kit on our car made it feel more S-Class than C-Class. The BMW 4 Series remains more fun to drive, but there’s a lot to like about Mercedes’ classy coupé.

The Mercedes C-Class has been on sale for more than 12 months, but until now the Coupe version has been conspicuous by its absence. That’s all set to change, though, as the sleek two-door has just hit UK shores.

It’s available with a choice of two petrols, two diesels and a fire-breathing AMG C 63 from launch, and it’s the mid-range C 250d we try here for the first time. It uses the same 2.1-litre four-cylinder diesel engine as the lesser C 220d, albeit tuned from 168bhp to 201bhp. This is a welcome boost in power, and it slashes the 0-62mph sprint time by eight-tenths of a second.

The Coupe feels surprisingly quick, and while true performance fans will want to wait for the AMG-fettled C 63, this engine offers a decent blend of pace and running costs. Speaking of which, Mercedes reckons this C 250d will return as much as 67.3mpg economy, while emitting only 112g/km of CO2. Even if you drive it hard, you’ll struggle to dip below 40mpg. Put it this way, any time you lose to AMG owners, you’ll make up for with fewer fuel stops. 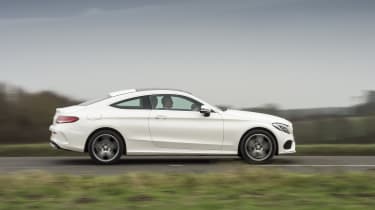 However, the engine is still a bit clattery and unrefined at low speeds. Things settle down on motorways, where the C-Class’ impressive sound insulation ensures very little in terms of wind and road noise. Unfortunately, the stop/start system is annoyingly eager to kick in, whereas rival set-ups will keep the engine running until you fully depress the brake pedal.

Out on the open road, it’s clear this Coupe is for posing rather than performance. It’s quick, sure, but even in sporty AMG spec, the car tends to wallow a bit in corners. It doesn’t feel as sharp as a BMW 4 Series – although that’s likely to be remedied if you specify the optional adaptive dampers.

You can shift through a variety of driving modes, allowing you to alter the steering, throttle and gearbox response. We found Sport works best, making the car more taut without the steering feeling overly artificial. 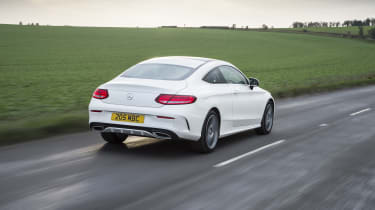 The nine-speed auto gearbox sets the Mercedes apart from its rivals. You simply don’t know it’s there – hurriedly shifting through cogs in the background. It’ll sit in ninth at 70mph, and can switch to fifth with a sharp jab of the throttle. It suits the car’s relaxed nature really well, although if you want a sportier feel, BMW’s eight-speed box is more rewarding when driving fast.

Most people will buy the C-Class Coupe not for how it drives, but for how it looks – and it’s safe to say the new two-door cuts a striking profile. It mimics the larger S-Class Coupe from both the front and rear, and Mercedes’ designers have done a great job of restyling the boxy saloon shape of the old model. It looks particularly good in our car’s AMG Line spec, with 18-inch alloys, a subtle bodykit and a bold diamond grille. Inside, it’s a luxury tour de force, with plush materials and figure-hugging seats. 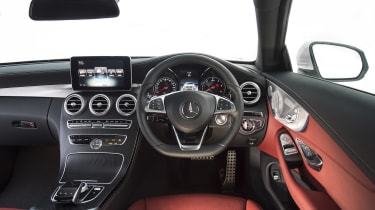 The dash is beautifully crafted, making the car feel infinitely more special than the dated Audi A5. Even so, a new A5 is on its way later this year and is expected to adopt the A4’s brilliant Virtual Cockpit display.

There were some lovely touches on our car, such as the classy Burmester stereo and the illuminated door cards that send a pool of light to the window switches. Both of these come with the Premium Plus Package, which also brings keyless go, electric memory seats, a panoramic glass sunroof and a larger 8.4-inch central display. It’s not cheap, at £2,995, but it adds another dimension to the already exquisite interior.

Hop in the back, however, and while it feels upmarket, there’s not a lot of room. The seats are mounted towards the middle for extra space, yet it’s still tight. The boot is 45 litres shy of the 4 Series’, too – although the seats fold for added practicality.