We get to grips with Nissan's special edition muscle car. Have a round of changes made it any better? 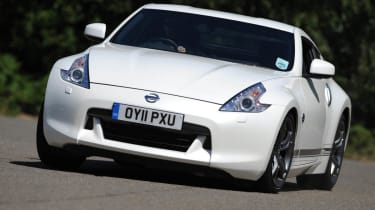 In some ways, the 370Z is one of the last unrepentant muscle cars around, and the GT Edition only builds on that appeal. The driving experience has been made slightly more refined by the suspension changes, and it’s now a much more cohesive, comfortable car to drive everyday. Yet the engine and interior still lacks the kind of soul and personality that turn a good sports car into a truly brilliant one.

Amazingly, it’s now been 40 years since Nissan’s original Z car - the 240Z – first arrived on British roads, and to celebrate the anniversary in style, the Japanese firm has revealed a special ‘GT’ edition of its modern muscle car, the 370Z.

Said to be inspired by Nissan exploits on the racetrack, the newcomer certainly won’t be too hard to spot. A pair of pronounced grey racing stripes run along the side sills, and those gorgeous 19-inch RAYS alloys have been given a dark chrome finish to give the Z an extra sense of menace, contrasting nicely with the pearlescent white paint.

On the inside, the GT Edition comes with a touch screen sat-nav as standard, and a full reversing camera has been included for the first time, a handy addition when you consider the 370’s wide rear haunches and miniature back window.

Other extras, like a tyre pressure monitoring system, and a new ‘snow’ setting for the optional seven-speed automatic gearbox, are welcome too, but the most important changes are all hidden beneath the bright bodywork.

Unlike many exclusive special editions, the GT is far more than just a set of cosmetic tweaks. Nissan’s European engineers have been through it with a fine toothcomb, and tried to smooth over some of the standard 370’s rougher edges.

The suspension and dampers have both been fettled to help improve the bone-shaking ride, but Nissan also claims that the modifications should also help keep the Z planted through faster corners. So have the changes had the desired effect?

We managed to test the GT Edition on the road and at the track, but it’s on public roads, particularly the motorway, that the differences start to become apparent. While the ride is still firm, it jolts and fidgets far less than before, and is much more forgiving over broken surfaces.

Combined with added underfloor insulation that helps reduce the booming rumble of the tyres, the 370Z starts to seem more like a relaxed cruiser than a hard-edged track special, but make no mistake; it’s still a properly uncompromising sports car.

Power delivery from the 3.7-litre V6 is brutal, and the heavy clutch and meaty steering turn driving on demanding roads into something of a work out. It’s also not as tail-happy as you might expect, as the huge levels of grip from the rear tyres mean that it has to be seriously provoked before the tail begins to slide. Even so, the GT Edition tackles faster turns with greater assurance than ever. There’s noticeably less kick back from the steering during mid-corner bumps, and the added composure gives you the confidence to use the 324bhp on tap.

Sadly though, the updates can’t tackle the 370’s biggest problem – its drivetrain. It’s hard to argue with the performance it offers, but it just doesn’t feel special enough for a £35,000 car. Even at higher revs the exhaust note is coarse and characterless, and despite the unique styling, this lack of personality means that it’s a difficult car to fall for.

Some buyers will be able to look past these flaws, but ultimately two-seater coupés, with all their sacrifices to practicality, have to appeal to both heart and head, and although the GT Edition is the best 370Z yet, it still falls short of greatness.