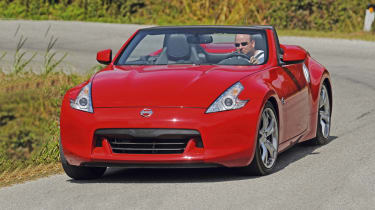 Losing the roof has enhanced the 370Z’s appeal without compromising on the features which make the latest coupé so good. Inevitably, the boot capacity has tumbled – but this won’t bother many buyers. What matters more is that the new Nissan looks good, and has the potential to deliver the driving thrills to match. It’s as quick as premium rivals, yet cheaper.

The Z-car has blown its top and been transformed from coupé to convertible! And just like the fixed-roof model, Nissan’s 370Z Roadster is shorter, more squat and far more purposeful-looking than the 350Z it replaces.

Its 3.7-litre V6 engine packs some serious punch to match the stunning design, too.

It delivers 326bhp – the same as the coupé, so the Roadster should be quick. And while it’s gained 90kg from extra chassis strengthening, this is offset by the fact Nissan has stuck with a lightweight fabric roof.

Driving over rough surfaces, there’s a hint of scuttle shake in the cabin; otherwise, the new cabrio delivers the same poise and precision as the latest tin-top. The steering is accurate, with plenty of feedback, while the nose turns in sharply and grips hard even in tight bends.

As is often the case with Nissan’s Z-cars, the rear gives up its grip first on the limit.

The back wheels are easily coaxed into sliding wide, while the fronts cling on and keep you heading in the right direction. But it’s all very easy and controlled, and inspires confidence. Bumps in the road are soaked up effectively by the supple suspension and the Roadster remains flat in corners – so many of the drop-top 350Z’s characteristics have successfully been carried over.

The six-speed manual gearbox has a mechanical feel, and you need a firm hand to push the chunky lever up and down the gate. Once you’ve mastered it, you are rewarded with ever-increasing pace as the V6 delivers lots of urge throughout the rev range.

The brakes are equally happy to be used hard. This is a car that revels in being pushed – and it even gives you a helping hand. There’s a rev-matching system which automatically blips the throttle to make you sound like a true professional behind the wheel when shifting down through the gears.

Plus, the intervention of the stability control is as subtle as it is effective.

The result is easily enough pace to keep up with sports car rivals such as the Porsche Boxster and BMW Z4. On top of this, the Z now has a cabin to match those of premium rivals, with superior-quality materials and smarter styling.

It’s just a shame that the exhaust lacks the rousing burble of its predecessor.

Another criticism is that, although the hood operates quickly, the car has to be stationary for it to do so. Rival systems often allow drivers to raise or lower the lid at speeds up to around 30mph. There’s no reach adjustment on the steering wheel, either. Then again, when you look at the performance figures, these shortcomings are easy to forgive. Not many models come as close to the sports car class leaders for this price.

Rival: Porsche Boxster S For ultimate poise, the Boxster tops the class, however, it will cost you about £10,000 more than the Nissan – and doesn’t offer any more pace. Potential buyers would have to decide whether they want to pay the extra for the prestige badge.