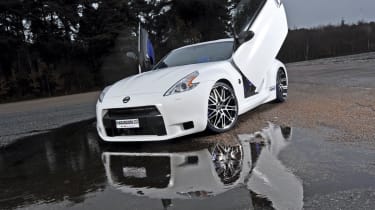 The Marangoni Z-Hydro is designed for those who think a regular Nissan 370Z isn’t dramatic enough! With scissor doors, a well judged bodykit and gorgeous 20-inch alloy wheels allied to matt white paintwork, it really stands out. But the visual tweaks are a smokescreen for some genuinely interesting technology, which seeks to reduce harmful emissions and improve fuel economy. Marangoni’s claims are almost as dramatic as the Z-Hydro’s looks – and we can’t wait to see how the science behind it develops.

Meet the stunning scissor-doored super-coupé that drinks fuel like a supermini!

This incredible machine is the Z-Hydro – a one-off show car that started life as a Nissan 370Z. Thanks to Italian tyre company Marangoni, and a host of its tuning partners, it’s now a 155mph eco warrior that does nearly 40mpg and emits only 148g/km of CO2. And Auto Express has driven it.

Regular readers might recall our last meeting with Rome-based Marangoni in Issue 1,046, when we drove the M430 – a modified Alfa Romeo MiTo. Like that car, the Z-Hydro is a very Italian affair. Its Lamborghini Countach-style doors, 20-inch alloys and dramatic bodykit are the work of Florence-based tuning firm TRC Italia, while Marangoni itself has supplied M Power blue-tinted tyres.

Other modifications include lowered suspension and Tar Ox brakes with composite discs, while inside there’s lots of blue leather and Alcantara suede. But the most interesting technology is hidden. Mounted behind the gaping front bumper is a clever piece of kit that splits water into oxygen and hydrogen, then injects the gas – oxyhydrogen – into the V6 engine’s air intake.

Marangoni’s co-development partners, TRC Italia, HydroMoving and Mariani Engineering, say the improved combustion process reduces harmful emissions, such as CO2, by 40 per cent. It also improves fuel economy by the same amount – but maintains the 3.7-litre car’s 322bhp. In the future, the Hydro kit could be tuned to deliver more power.

Sound too good to be true? Sceptics argue that the energy required to produce oxyhydrogen exceeds that recouped by burning it. Marangoni rejects this, claiming the process is so efficient that the car is as green as its remarkable figures suggest.

On the move, the changes to the suspension and wheels ensure that, apart from having a firmer ride, the Z-Hydro feels similar to a regular 370Z. The Hydro kit doesn’t affect the V6’s performance, and it offers muscular urge with lots of low-down torque, while those wide tyres only enhance the handling.

Marangoni plans to offer the Hydro system as a retro-fit kit for around £800, and is even looking at licensing it to major car makers. In the meantime, all the other components are available now – and many owners are sure to be tempted to give their 370Z a dose of extra visual excitement.