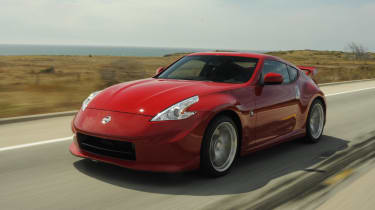 There are plenty of people in the UK who would love this more intense hit of Z car. Sure, there are some trade offs in comfort thanks to its extreme suspension settings, but we’re sure Nissan could make the NISMO work on our less than perfect road surfaces. For the looks alone we want it, but add in the fruiter sound and more incisive steering and the NISMO is very appealing indeed.

Jealousy is a terrible thing, but having just driven Nissan’s NISMO 370Z we’re feeling pangs of it here. The NISMO is an American-only model for now, it turning the already brilliant 370Z into an altogether more entertaining machine. In typical NISMO style the numbers associated with the 370Z NISMO aren’t huge - the 3.7-litre V6 engine gets a rather small 18bhp increase in power while torque rises by a single figure.

Which makes the more overt looks seem a bit over the top at first, the NISMO’s bigger rear wing, longer lower nose with a neater air intake, and deeper side skirts suggesting more than the modest increases the NISMO tweaking brings. With its far more muscular looks the NISMO looks like a proper Porsche fighter, its lower stance coming thanks to revised suspension settings and the huge lightweight 19-inch RAYS alloy wheels.

The engine might now rev a bit higher and harder, but the NISMO’s driving experience is dominated by the changes to the springs and dampers. It’s firm, overly so on harsher surfaces, but it still retains its non-NISMO sibling’s ability to flow with surprising composure down tricky roads. Everything underneath is stiffer - the rear dampers by 140% - which means you’ll have to be prepared to put up with some compromises on the comfort front. They’re worth it though for the additional sharpness on offer from the NISMO, the steering in particular delivering excellent turn-in and nice feel, the grip from the front wheels hugely impressive.

As ever the rear wheels can be involved in steering the Z, the NISMO as playful at the rear as the regular car. It’s all very controllable too, the Z not exhibiting no nasty vices in its handling. Inside you’re held in tighter thanks to NISMO branded sports seats and there’s a NISMO rev-counter dominating the instrument binnacle. Its needle sweeps with greater vigour and although Nissan USA doesn’t reveal any official performance figures for the NISMO it feels quicker than the standard 370Z’s 5.3 second 0-62mph time.

It sounds quicker too, its twin exhausts allowing the engine to breathe easier and reveal more of its aural character. That makes shifting the mechanical-feeling manual six-speeder even more fun, whether you’re letting the clever SynchroRev Match system blip the throttle or doing it yourself. That it’s only offered with the manual transmission underlines its focus as a car for enthusiasts, of the sort we’ve plenty of here in the UK. Which begs the question why Nissan UK isn’t offering the NISMO to 370Z customers here?

Rival: Porsche Cayman S The Cayman S might be a more delicate, flowing driver but it’s not quite as focussed in its intent as the NISMO 370Z. Hardcore drivers might find the Cayman a bit dull after the wilder NISMO, but the Porsche would make a more comfortable daily driver - assuming you can afford the premium it would cost over the brawny Nissan.